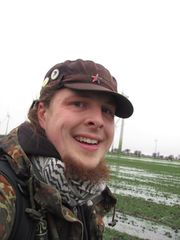 Looking closely, you can see that I am quite out of breath!

On the German Baltic island of Fehmarn, approximately halfway between the villages of Dänschendorf and Vadersdorf (No, it's not pronounced like the Sith Lord's name, but I like to pretend it is).

More than two hours have already gone into planning this! For somebody not owning a car, this hash is a major pain in the back. Here are my thwarted plans, in the order of their inception:

Well, the plan did turn out to be a success! Riding an ICE in Germany is always something, and we were enjoying the ride. We got off on the last stop before the train entered the ferry to Denmark, and that's why my girlfriend and me had a minor falling out: Some customs officers passed through the train performing controls of people and their luggage, and I got aggressive with them because of the general repugnance I feel towards border control police. My girlfriend was upset about the squabble I started, but we talked it over and cleared it up.

When we got off, the place was even more underwhelming than we had feared. We were facing a major ferry port with nobody around and in the pouring rain. We consulted my GPS and took off towards Puttgarden. We failed to find any sort of bakery or café, and in fact we could probably have counted the number of houses in Puttgarden on our combined four hands.

We took shelter from the rain in front of a closed restaurant and called the taxi to take us to the hash. Our driver was a nice lady who took an interest in our activity, but unfortunately also took a huge detour, so the ride was ridiculously expensive for us. That needn't have been out of malice, though, because only three days earlier most of the island had been flooded, and some streets were still closed. Coming in and out of the village I had initially stated to be our destination, and getting further into the fields, she begrudginly steered the taxi through deep puddles of mud and remarked how she would have to clean it afterward. She did, however, stay cheerful all through the ride.

When we arrived at the hash, it was indeed on a recently flooded field, though not as bad as some. My girlfriend got out with me, but decided to stay and wait near the wind turbine closest to the road. I wasn't sure if the taxi driver was charging for waiting, and every second I stayed on the field increased my chances of getting wet feet or sinking in, so I was running towards the hash most of the time. When I got there, I was quite out of breath, but very happy for taking one of Germany's last four virgin graticules.

The way back was much less expensive, also because we decided not to go back to Puttgarden, but to take the slow train back from Burg. With my shoes and trousers a horrible mess, our driver was again struck by how dirty the taxi was going to end up. Luckily, I had an old issue of the German "Linux User" magazine with me, upon which I placed my feet to save her taxi. Arriving in Burg, we sat down at a baker's shop and had some nice coffee and cake. Shortly before leaving, I spotted a neonazi sticker, and with some borrowed equipment from the bakery, I took care of it.

We walked to the train station and waited for the train. The question of which platform we should take was rendered moot by the fact that there was only one platform! The ride back was very relaxed, and at home we made some vegetarian burgers with fresh vegetables in celebration of a hash well done!