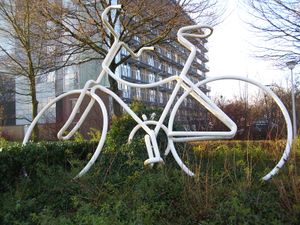 In the town of Oosterhout, at the side of a road. Seems easily reachable.

The weather is clearing up and it's about 15 km cycling one-way. Alright, I will be leaving soon.

As I said in the plans, the weather was quite good today. It got sunny although there were still a few clouds. When I left, I got a bit of rain and a lot of headwind, so like usual I felt crazy to go to a random place in the middle of nowhere just to take some pics to upload here :P.

Anyway, I went on, passing the town of 's Gravenmoer on the way. (Dare for bonus points for any non-Dutch geohashers: Try to pronounce the name of this town right. More info on the talk page.). The road was mostly straightforward, but I used the GPS to find my way in the end. The slightly less than 15 km took me slightly less than an hour.

In the end I came to the town of Oosterhout in which the hashpoint was located. Oosterhout means "Eastern wood" which is weird because it's to the West and there's not much wood there. I reached the point with both Sir Sol and Lady Luna watching over me, it was easy to find. I took most of the pics there and uniquely got an exactly right GPS coords fix. I quickly attached the marker while the batteries of my camera were starting to fail, picked up that bottle (yay geotrash achievement) and went back the same way I came. The route I took there was probably the quickest route so I took it again going back, only this time the wind was on my side so it took me only just over 30 minutes. I threw the bottle in a litter bin along the way and was home before dark.