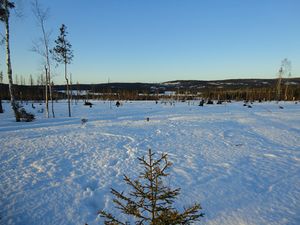 Up in some logging ground, a bit from a road.

Seeing as I had access to a car, I would not waste the opportunity and scouted all the nearby graticules for possible points. Found a few and decided on two of them.

Continuing from 2012-03-12 63 19, I returned to the E4 and drove back through Örnsköldsvik, turning out on road 335 towards Sollefteå. After passing Sidensjö I started looking out for the hashpoint area and after entering it, looking for the road towards the hashpoint. I found it, being fully snow covered as expected and luckily a parking spot just a little bit ahead from it. So I got out of the car and walked back to the road. Looking out across the snow I started doubting walking out there, but since I had got this far I went up and tried the snow, which was hard enough for me not to sink too deep.

I walked a kilometer up the logging road to the crossroads. Stopping to tie my shoelace, my map decided to blow away in the wind so I had to chase it before being able to triangulate the hashpoint.

Seeing as it would be approximately at a big birch out on the field, I set out to it, sinking deeper a few times into the snow. Ended up waist deep after stupidly walking over a couple pines, but kept going.

The wind being rather strong over the open fields and very cold: wind chill temperatures definitely being in the freezing range. After reaching the spot, I hacked a tag into the snow for any passing hares to read and took a few photos before making the journey back, the sun setting making everything darker rather fast.

Upon finally reaching the car, my feet were drenched with snow getting into my boots and they even were still a bit cold after the two hour drive back home.