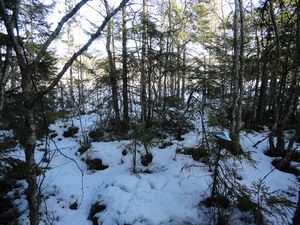 Location surveyed to be between a road and a lake, in another sliver of forest.

Seeing as I had access to a car, I would not waste the opportunity and scouted all the nearby graticules for possible points. Found a few and decided on two of them.

So I set out in the car for the 100km-ish drive north. The day was quite windy and I could feel the winds grabbing hold of the car. When crossing the bridge, they had a warning for strong side winds, which I could really feel. The drive was otherwise rather uneventful up until past Örnsköldsvik. When passing the first landmark, the golf course in Puttom (a fitting location for a golf course), I knew it would be time to turn off the main road. After a series of progressively smaller roads, I reached the hashpoint. So I got out of the car, walked across the small logging grounds and stepped into the hashpoint area, which seemed to be prime lingonberry grounds. After marking the spot and doing some photos, I headed back to the car to drive to the next hashpoint: 2012-03-12 63 18

Device still in a not working well state.