North of Grant in the Pike National Forest, about .6 miles from CR 62.

The plan is to go to a hash in the graticule east of me, as it looks more interesting than my current graticule's hash today. I'll be riding my motorcycle again, this time to the Pike National Forest north of Grant. Making sure to pack plenty of water this time.

The motorcycle ride north on 285 was nice and as always I enjoyed the views of South Park. The road (CR 62) North from Grant was in fairly poor condition, I actually preferred the portions where it was not paved, as they were sans potholes. When I got to the location where the hash was closest to the road my hopes of finding a dirt road up out of the valley towards the hash were crushed by a US Forest Service sign, which threatened terrible legal action if you drove past the locked gate. It looked like it was going to be all feet power from here. About 300 feet below the gate was a marsh area, fed by a stream coming from the direction of the hash-point. I looked up at the steep ridge ahead of me, which was in the direction of the hash, and prepared myself to climb straight up a treeless slit which appeared to have been created by a mudslide. I soon found the old forest service road that switch-backed up the ridge, and decided to give it a try. After seeing fresh moose tracks and droppings though, I decided it might be best to stay the (steep) course in the non-wooded area. Then I found some nature-hating bastard left a plastic bottle, Geotrashing success! (On the way down I recovered a spent shotgun shell as well...) After about .5 miles of arduous hiking, I found myself breaking treeline in a large open field with beautiful views. I found the hash-point to be just on the other side of the ridge, at the location of a fallen tree. (.65 miles from the valley) In the valley, my elevation was 10,840 ft / 3304 m, when I reached the hash-point my elevation was 11,750 ft / 3581 m. The third highest geohash to date! Had I thought to record the altitude of the ridge's peak, I could have calculated the average grade of my hike, which I suspect would be fairly high. The journey back down was much faster and easier thanks to Earth's gravitational field. I started to take a slightly different route back down, but then realized I was in a marshy area on the slope, which tend to have high moose activity. I could have sworn I saw one rustling some branches at a distance as I walked by, but whether I did or not, the tracks I found near the marsh there made me believe that at some point at least one had seen me. Once I got back down to the valley, I gathered my gear and rode back to Fairplay. In all, 97.4 miles traveled round-trip. First successful hash! 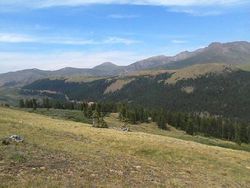 View from the top of the ridge over the valley from which I started from, you can see CR-62 in the distance, down in the valley. 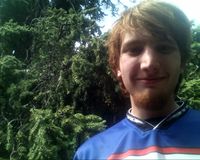 Smiling me, at the hash-point by a fallen tree.