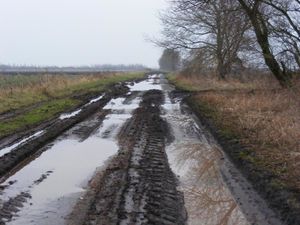 The edge of a field south of Haddenham village, near Ely.

On Monday afternoon, Ben was thinking about going out to Stretham and Haddenham to find some geocaches, but put it off until after 2:30 so that he could see where Tuesday's geohash would be. Surprisingly, it turned out to be in a field south of Haddenham, not too far away from the final cache on Ben's list, so he decided to put off the caching until Tuesday afternoon, following it up with the short hop to find the hashpoint.

The geocaching trip went exactly to plan. I drove up from Cambridge to Stretham, found three caches and a nice footpath through the village, then moved on to Wilburton (one cache) and Haddenham (one cache), and finally out of Haddenham village onto the droveways (long and winding farm tracks, often rather roughly-surfaced). One final cache was located in a tree, and then I turned my attention to the hashpoint.

Conveniently, I'd already driven out of the village in the correct direction, so just needed to go a mile or so further. Unfortunately the recent wet weather and the awful road surface combined to make a very water-logged, rutted track and it took rather a long time to drive that mile. At one point I even had to hang out of the window in order to spot where the road was, under the water. Happily, these roads don't really go anywhere (apart from a few farms) and there was no other traffic at all.

On getting near the field containing the hashpoint I decided that I'd had enough of that and abandoned the car on the verge, which I hoped seemed hard enough that the car wouldn't sink into the ground, despite all the rain. This part of the field contained greenery (probably sugarbeet), but it was clear that the hashpoint was beyond this, in an empty section of the field. I walked along the edge of the plants, and then out over the stubble onto the harvested part.

The spot itself was very easily found, with clear skies, good GPS reception and no obstacles in my way (except for the mud, which was caking the soles of my boots). It felt very empty out here -- no people, hardly any buildings in sight and almost no sound apart from the wind. The view didn't merit highly, though, so after a short while I trudged back to the car, scraped the mud off my shoes with a stick and went home. A nice easy hashpoint -- it would even be a nice spot in the summer, but it was a little desolate today.