Gauting near Munich, in a schoolyard. 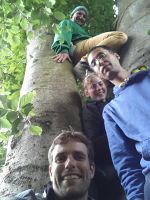 Three brave geohashers from Innsbruck (1-0, RunningSushi and LeslieHapablap) are poaching in northern hashgrounds of the Munich graticule. They drag along Risctaker and meet Almagest at the hashpoint to make this a Saturday meetup which deserve its name.

Weekend in summer is juggling convention time. After Freiburg two weeks ago (geohashing included), this time the convention calender sent us to Munich. The district Pasing was celebrating its 1250 year anniversary with a street festival, and as part of this event the local juggling association JIM was organizing a small but exquisite convention. Small because it had less than a hundred participants, and exquisite because the guest list included some of the best jugglers worldwide. Thanks to the sponsorship of a nearby shopping mall everything was free of charge for the participants, including excellent catering, a gym to practice and a place to sleep. 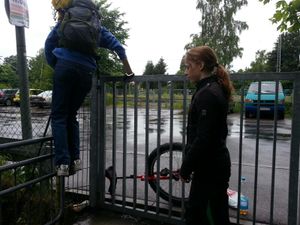 We save the "No trespassing consolation prize" for another expedition.

As part of the arrangement, on two central areas of the festival the jugglers entertained the crowds by showing their skills, teaching and talking to people, performances and juggling games. All together the convention was a lot of fun and the weather played along nicely at least on the second day. To top it all the hashpoint for Saturday was only 10 km away from Pasing, easily reachable (or so we thought) directly next to a station of the urban railway. The perfect opportunity to start the minesweeper achievement and even to introduce new people to our sport. 1-0 and LeslieHapablap have been hashing together in Innsbruck before, but for RunningSushi and Risctaker it was the first expedition.

On juggling conventions it is common that several workshops are offered, most but not all of them are related to juggling. So we announced a workshop on geohashing, and we even got a participant (Risctaker), which is more than many of the more exotic workshops at conventions have. For Risctaker it was the first time that he had heard of geohashing, but still he was brave enough to join us with his unicycle on this adventurous expedition. At 3:15 pm we purchased a group ticket and got on our train to Gauting, a ride of about 20 minutes. From the station in Gauting it was only about a hundred meters to the schoolyard where the hashpoint was located. Unfortunately there was a fence all around the yard and all the gates were closed. We climbed over one of the gates ignoring several signs which told us not to do so, performed the usual GPS dance and finally pinpointed the coordinates at a very peculiar tree with two trunks.

Panorama view of the schoolyard with the hashpoint.

Of course the tree was forced to take part in several nonsense activities like juggling clubs through between the two trunks, taking silly group pictures and marking the place with the xkcd writing. At exactly 4 pm Almagest joined our group. He told us that he is usually sort of ninja-geohashing in the Munich graticule without documenting his expeditions on the wiki. For us it was the first time to actually meet someone at a Saturday meeting (yay for another achievement)! After some more fun with the two unicycles, juggling balls, clubs and the local accessory of the schoolyard we declared it a successful geohashing expedition and took the train back to Pasing, were we continued to have an amazing convention.

Here is a small video of us at the hashpoint.