The route we are planning to take has a top rating, so we are very much looking forward to this tour. We hope to be at the hashpoint at 1pm, which is the official Saturday meetup time for this graticule. 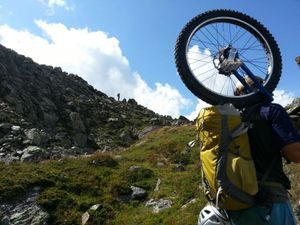 Our group got some strange looks by other people we met on the way. 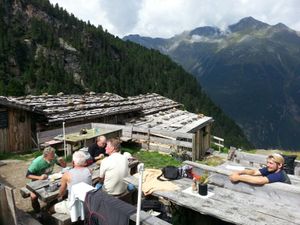 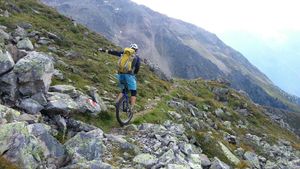 Yes, after a few months of inactivity the Tiroleans are back with more fun in the Alps. This time the Dow Jones sent us to the beautiful Stubai Valley, a very popular holiday region famous for its glacier at the end of the valley. The satellite images of the hashpoint looked very promising and in Google-Earth the terrain seemed not too steep (more on that later). Furthermore it was not too far off a hiking trail near an alpine cabin (the "Mischbachalm") where hikers can rest and enjoy simple but excellent meals. The weather forecast was okay for the day, so we decided to go for it. The route we planned to take was documented in a guide and described as a challenging but beautiful tour.

This time 1-0 decided to take his unicycle with him. Just in case you wonder: yes, this is what he enjoys most, climbing on mountains and racing downhill on a unicycle. For some video footage have a look at his homepage.

The first ascent was pretty steep and exhausting. Along the way there were wooden signs with little poems written on them to encourage guests of the Mischbachalm and tell them the remaining walking time to the destination. Here and there we stopped to eat some blueberries of which we found plenty on our way. We also spotted a black salamander, the little creature was not too impressed by our presence and strolled on slowly. The reward for the first 600m elevation gain was an excellent lunch and stunning views over the Stubai Valley at the Mischbachalm, a small and rustic wooden cabin with many animals around and very friendly owners. Some other guests were quite puzzled why on earth anyone would bring an unicycle and juggling clubs up a mountain. 1-0's explanation: this stuff is way easier on a mountain because gravity doesn't pull as hard.

Panorama view of the hashpoint area. 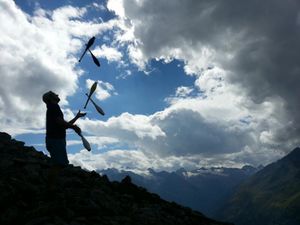 1-0 juggling at the highest point of the tour, with the Stubai glacier in the background

After our lunch break we continued towards the hashpoint, which was only a few hundred meters away according to our GPS device. However we learned soon that in the alpine terrain it is not always easy to figure out the optimal route to a given point, even when it is already close. After continuing on the hiking trail and climbing for some time we finally left the trail heading towards the hashpoint and made our way through bushes and more blueberries. Because it was clear now that sooner or later we would need our hands to move on, 1-0 left his unicycle behind to pick it up later. Even though we could only move very slowly, we steadily approached the hashpoint and hoped to reach it soon. But when the GPS showed a distance of 35 m, we found ourselves standing on the edge of a cliff with absolutely no way to go any further in that direction. We decided to go back and try to go around the cliff in order to approach the hashpoint from below instead of above, and indeed this proved to be the right strategy. After some more climbing the GPS finally confirmed that we had reached the coordinates. At 1pm we were within 200m of the hashpoint, but because of these difficulties it took us about 30 more minutes to reach it. Nevertheless we claim this to be a "Saturday meetup" because surely we would have met every other potential geohasher being there at the proper meetup time 1pm.

We moved a few meters away from the hashpoint to a place where it was easier to find a safe stand and took the obligatory group picture with the three of us and Waltraud the hashkiwi. Because it has become some sort of tradition by now 1-0 and LeslieHapablap also juggled, with the added difficulty that any dropped club would immediately speed downhill for quite some distance (luckily we could recover them all). Encouraged by reaching the coordinates we returned to the trail, 1-0 picked up his unicycle and we continued on our regular route.

At the highest point ("Glücksgrat", roughly translates to "Ridge of Joy") we rested again, with a perfect view onto the Stubai glacier and some threatening rain clouds. From this point on it paid out for 1-0 to carry his unicycle up, as he could now ride down to the valley whereas EleanorAbernathy and LeslieHapablap had to walk all the way. Now and then 1-0 waited for the rest of the group, and finally we all arrived where we started almost eight hours earlier. As soon as we got back in the car it started to rain quite heavily.

Our tracklog with a gap where the GPS was accidentally not recording.