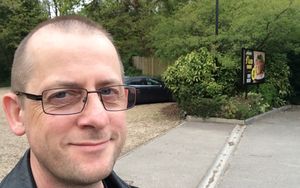 Just outside the car park of the Fox and Hounds public house, Bursledon, Southampton, UK.

A pub hash in Bursledon, only 920m from Macronencer's house (he plans to be there at some point tonight, around 8pm). There's a nice ISS pass at about 9pm too... we could watch that if there are any of us there at that time. That gives us an hour to have a beer...

Sorry, this is a pretty boring one. Some people I was hoping to drag along didn't make it, so it was just me. I just took some photos and came home again, given that it was only a short distance away. Yes, it's lazy hashing, but never mind. At least I got one this year! I could have got two achievements for this one if I had cheated a little. The pub geohash was within reach, but who wants to drink alone? Then there was the Geotrash one… but I only picked up a single piece of paper. Didn't feel right to claim the achievement, frankly!