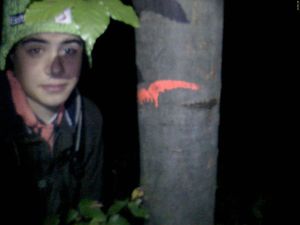 Forest behind Koblenz-Arenberg, close to a possibly good-quality forest path.

The GZ is about 300m from the final coordinates of a mystery geocache solved, so making a trip to Koblenz to take them both, despite the gasoline costs, is not unreasonable.

Bad luck, when leaving the parking lot at work, mirabilos managed to oversee a pole and put a dent into his car ☹

Drove picking up the second person on the tour, went to Andernach for OC2968 and collateral geodamage, drove to Koblenz to the recommended parking spot of one geocache (this is where the tracklog begins, cut off the boring part, and it ends when exiting the GPS app to start the camera app), and off we went, into the deep dark forest.

mirabilos probably should edit OSM, because the forest path was most definitely not as nice as promised, and got worse instead of better later.

Nevertheless, managed ±1m on 20:12, which is better than the GPSr normally gets.

Since both our flashlights started troubling, and my reserve one is much less powerful, we decided to cut off there and skip the geocaches in that forest, and continue to the GeoVexilla mirabilos wanted to capture, and assorted geocaches in that area, instead. Bad luck day continued with an indigestion (acid heartburn? allergy?) during food…

We did not meet any other geohashers, but that would probably have scared us more instead.