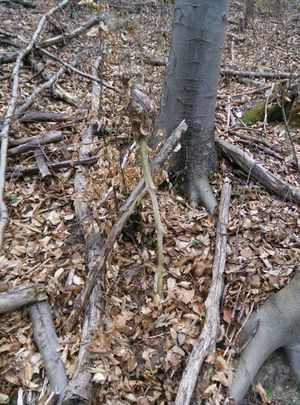 probably one of the most difficult to access hashpoint in the history of hashpoints. up and downhill through thorn fields

Today's hash was located near Alland (south-west of Vienna) near Mödling deep down in a forest. It reminded me of the Sherwood Forest, if you know what I mean ;) But anyway, let me tell you this: Every hash has its thorn....we were soon to find this out ourselves.

On Friday afternoon I got an IM from B2c about a spontaneous upcoming Hash Expedition on Sunday, joined by his friend Crankl. At first we planned on doing a different hash (the Bratislava Hash, which we ended up doing as well afterwards). But more of that later on. I was up totally up for it, since I hadn't been hashing for quite some time. We decided to meet on a late Sunday afternoon, because I had to take care of a few things beforehand.

Ok, since my Sunday plans didn't work the way I had planned we decided to meet up pretty spontaneously at the subway station "Siebenhirten", where B2c picked up Crankl and me. This seemed reasonable since it wasn't so far off from Alland. The drive to the hashpoint was pretty straight forward compared to what lied ahead of us. The satnav guided us to the closest point reachable by car, since we knew the hashpoint was in the midst of the forest. We decided to walk the rest by foot.......straight up a hill. -.- B2c took up the lead, as usual, guiding us to the hashpoint. Unfortunately he also set the tempo, which left Crankl and Micsnare a wee bit behind, but they soon caught up with him. This hash proved more difficult than the usual ones for the following reasons:

So this left us with quite some challenges. Fighting of those thorns AND finding the exact location. Once we reached the peak of the hill, it turned out we needed to go downwards the other. *facepalm* For the next 10 minutes or so we wished we had brought a machete fighting through those raspberry thorn fields and for a better GPS device.

Thankfully, being the tenacious hash hunters that we are, we finally found the hashpoint (please see the proof pictures below). We quickly took our Stupid Grin (tm) selfie and wrapped it up since we also had plans on catching a second hash.

Please don't laugh, but on the way back to the car, we found that there was an even easier way to reach the hash...we took the direct route, but instead we could have also ran around the hill through a soaking meadow. Yeah!

Arriving pretty dirty but happy back at the hashmobile, we decided to call up our good friend Datschech to keep us company on the upcoming Bratislava hash... To find out what lay ahead of us, please head over here2015-03-22 48 17.