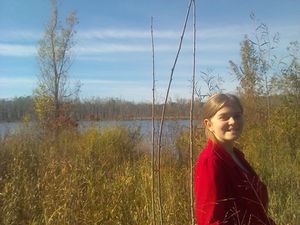 Beautiful fall Saturday, and the hashpoint is about six miles from home, in a public park near a paved path. If no one else wanted to go I'd have biked it but both Rebekah and Susanne were game so Rebekah drove. The city park, which is quite lovely now, was reclaimed from land used for years for sand, gravel, and gypsum mines, and is full of shallow lakes and boggy areas.

We had to make several attempts; the first two, along a gravelly dry streambed and from the closest approach of the paved path to the hashpoint, were stopped by swamp. I had about decided to declare Kingdom for Boat. Rebekah pointed out that the hashpoint might lie in a spit of forested high ground between the swamp and the next lake, and suggested trying an approach from due south of the hashpoint hoping we could move along the spit. She was right. Some of it was thick and brambly but other sections of the 100-m bushwhack were almost footpath-like. The hashpoint turned out to be on dry ground just beyond the trees, with a view over the lake. Susanne stayed on the paved path at the streambed bridge and sent us text messages, which we unfortunately ignored because we were focused on getting to the target.

On the way back to the path I picked up an old glass bottle and fragment of styrofoam cup for Geotrash.