In the Grębałów Cemetery in Cracow. Someone's going to get the coffin potato award...

Malgond wants to go in the evening. It should be easy as a pie even for a GPS-challenged geohasher. 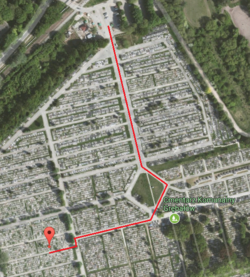 Just start at the main entrance, go along the main alley to the central square, walk around it, turn right and follow the lane up to the intesection. Turn left then right and walk a little more.

After reaching a green path between graves, walk back counting to ten. The grave behind the tenth one receives the award.

My expedition was successful. The coffin potato awards goes to the late Mr. Eugeniusz Ziaja. I have said prayers for the peace of his soul.

The day before I've heard on the local radio that a new section of the S7 expressway, being part of the eastern bypass route of the city, has just been opened for traffic, including a new bridge on the Vistula River. Perfect timing! It will lead me very close to the Grębałów district. I have finished my work today some time after 6 p.m., swiftly gathered my stuff and went to my car. I drove south till I've joined the southern section of the motorway bypass and went full speed east and then north along the new road. The new cable bridge looked cool, but sorry, no photos at 120 km/h! Since the new road isn't on Google Maps yet, I was not quite sure where exactly it will lead me. After it narrowed back to a standard street, I've used my gut feeling and turned left on the next intersection onto a dual-carriage street in hope I will find myself in familiar surroundings soon. Indeed, I've arrived at the central point of the Nowa Huta district, the Ronald Reagan Central Square, which was featured in one of my previous expeditions. It helped me re-establish my navigation and soon I was driving along the Kocmyrzowska street towards Grębałów. At approximately 7 p.m. I have parked my car next to the cemetery.

Reaching into my backpack I have realized that I have forgot to pack my usual hashcamera and I was forced to use my lame mobile phone instead. I strapped my pack and went along the planned path taking photos on my way. The cemetery lies on a gentle slope of a hill, commanding a nice view towards the south - unfortunately my low-quality photos cannot show that. The weather was fine and the air was clear, the sun slowly lowering over the western horizon. Arriving at the planned point I've counted the graves as shown above and found the right one. I took photos of it and the expedition was over. Looking around, I've found a small bench set in the ground in front of one of the graves. I sat there, fired up my laptop and uploaded the photos from my phone - I was afraid they would not be good. However, they looked quite fine for my phone's inferior capabilities, so I did not need to retake any. I have said a prayer at the hashgrave and walked back. Except an elderly couple I have passed at the main gate and another man filling a bottle at a water tap I have seen from afar there was no living soul to be seen in the cemetery. I was back at my car at 7.30.

Next to the cemetery lies the Grębałów Fort, one of the many fortifications built around Kraków in the second half of the 19th century during Austro-Hungarian rule. Unfortunately I have found the gate closed and guarded by a dog.