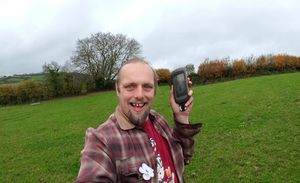 Field near Whitefield Rocks, Langley Marsh. Google Maps says its a nowhere-place but OpenStreetMap suggests there's a footpath right by the hashpoint.

Okay, I'm going for it! I'm driving from Oxford to Penzance this morning and having just watched the sun rise over Sedgemoor Services off the M5 I've determined that I'm ahead of schedule by enough that I can justify a diversion, so I'm going to try for this hashpoint as I "pass". Typing from mobile, apologies for lack of formatting ans any spelling errors; I'll fix them later. - DanQ

Driving from Oxford to Penzance in the world's-smallest-rental-car isn't a fun adventure. What is fun, though, is hitting up a graticule I've never hashed in before to see if I can find the day's hashpoint while en-route.

Parking the awfulmobile in a country lane, I followed the road and then a country footpath towards the hashpoint. I say "footpath", but the public right of way was in dire need of maintenance and the nettles and hedges were encroaching badly upon it. Which was troublesome, because the other side of the footpath was marked by an electric fence that I didn't want to touch, and so I had to shuffle sideways-at-times through the first field. The second field was easier-going, and I got a great view of the distant storm beginning to roll in which would soak me later, as I hid adventure-game clues atop a cliff near Penzance. The third field appeared to be where the hashpoint would be, and it was crossed by the public right of way, but I was surprised to find that the electric fence returned and now barred my way. Luckily its owner had seen fit to put a length of plastic piping around the live wire so it was possible to jump over without burning my crotch, but this seemed a little not-the-done-thing regardless.

The hashpoint was right in the middle of the field and an easy find. Certainly easier than the short-but-exciting hike there and back.