Swindon, United Kingdom In a field in Bentley Wood, between Salisbury and Stockbridge

Macronencer plans to get as close as possible for a 4pm meetup, and also a Leap geohash achievement. There is a footpath running across the field, but it doesn't go very close to the hash point, so an on-site decision about land type and access will be needed.

Further research has revealed that Bentley Wood is owned by a charitable trust and has an access policy, which is available via a link from this page. Since the hash point is in a field, I'm assuming that the prohibition on leaving the paths will not apply, as that is designed to protect the wildlife (it's actually a Site of Special Scientific Interest (SSSI)). Of course, reaching the hash point will require care and/or permission from the landowner, and this could possibly end up as a CNR. Regardless, it will be an interesting walk. The weather is currently forecast to be dry or light drizzle, but with strongish winds, so I'm not going to stick my neck out and say "pleasant walk". I'm bringing warm clothes, waterproofs and good boots.

One more thing... for anyone using the MotionX GPS app, I'm going to try sharing my position live, on channel 43843. I'll be leaving some time around 1330 I expect, so watch for updates on that channel if you want to see where I am in real time - and if you want to share your position as well, just use the same channel number in the app, then we can all see each other's position. This is a MotionX feature I've not tried before, so I might screw up :-S

As I’d been absent from both the sport and the wiki for six years, I wanted to return with style. Unfortunately my personal style advisor is taking a two-month sabbatical to recover from the stress of opening my sock drawer, so this wasn’t an option. I’d just have to wing it.

It’s funny to recall how efficient I’d become, back in 2009 when I was doing this every other week. With the help of some regular hashing buddies, I’d become a fairly seasoned adventurer. A peppered prepper, if you like. And I’d developed my ace bag-packing skills even further during a couple of years of rather enthusiastic time lapse photography… it all seemed to go by so fast.

Yet now, aged fifty-four and creaking a little, I’d become sedentary and unfit. I wanted to make sure I didn’t end up dying of hypothermia in a ditch. That really would be returning with style – with or without an advisor. 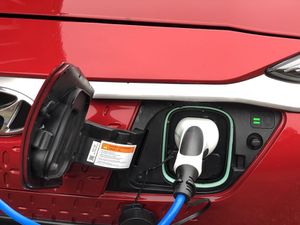 The first thing on the list was to make sure the car was charged the night before. I’ve been driving electric vehicles since late 2016 now, and I love them. My first was a BMW i3 and was electric blue. I called it Sonic. Continuing the theme, I now have a red Hyundai Kona, and I’ve named him Dash, after the boy in The Incredibles. Dash has well over 200 miles of range, making most geohashes quite practicable. I would have been much more nervous geohashing with Sonic, as his range was under a hundred miles. So, this morning the weather looked slightly dull, but fairly dry. I was expecting a little rain at the hash point, but it hadn’t put me off. And to cap it all, my special Hogwarts heat-reactive coasters, after a good shuffle, had been wise enough to give me Gryffindor when I lifted my early morning mug of tea. The Sorting Mat had spoken. It was a day for adventure! 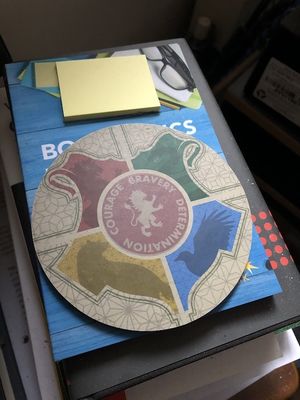 I knew it would take me under an hour to reach Bentley Wood, and I didn’t want to be hanging around too long for 4pm, so I waited until 1330 before leaving. Sermoa, meanwhile, was in touch by text and had set off long before, for her epic cycling trip in 55 11.

I used MotionX GPS app for positional tracking and comms, sharing my location under a five-digit channel in case others wanted to join me. I quite like that idea, and I’m glad to see that MotionX has remained a solid and usable app. I decided to take the route through Romsey as it’s more scenic. It seemed to become more and more sunny as I drove, and my spirits were lifted.

I turned right at Whiteparish, after which the road had more potholes than a stoner squirrel. It even had a flood, which luckily wasn’t too deep to negotiate. The road got pretty narrow now, and the sky was still bright to my left, but ahead was a massive bank of rather ominous clouds! Oh dear.

At West Dean there’s a level crossing, and it was around this time that I picked up a police tail for some reason, though there was no high-speed chase with guys firing guns from the running boards. I think they just needed to get somewhere, and they didn’t follow me when I turned left into the car park track. The track had even more potholes than the last lot, and since I’d already played the marijuana card I was lost for sarcastic jokes and had to resort to puns. On the hole, I didn’t enjoy the ride much.

I parked the car… and literally seconds later, the heavens opened. And I don’t mean in a Monty Python way with God sticking his head out to tell me to seek the grail at the hash point. I mean that water precipitated through the atmosphere onto my car. Some of it was frozen.

The forecast looked wet for an hour, but I was determined to get my Leap Hash achievement and, like a busy taxi driver, I wasn’t going to be stopped by a little hail. So, once there was a break from the rain, I nipped out and put my boots on. It soon became quite sunny again.

Bentley Woods is an SSSI, and is run by a charitable trust. I knew this. I had researched it the night before. I’d even printed out the access policy that said never to stray from the paths. So of course, I promptly forgot all that and headed off into the trees. I’ve made that sound worse than it was. In fact, the Ordnance Survey map had shown some other paths through the woods, that looked as though they would get me there more rapidly. The car park was 1.13km from the hash, which isn’t far… but I was concerned about having to double back around obstacles or something, and not making it for 1600.

After doing my best Blair Witch Project impression for a few minutes, I did indeed come across an actual path. Well, perhaps a more accurate term would be “mud glacier”. “Bouier”? I’m toying with French etymology there, sorry. 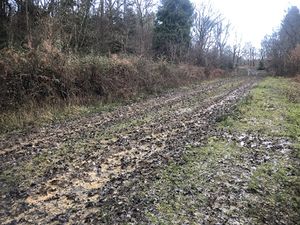 Progress north was extremely slow after this, due to said mud. My legs are aching as I write this, despite a long bath, and I blame the Ministry of Silly Walks gait I had to employ to make any headway. The fact that velociraptors kept trying to trip me up and send me face-first into the stuff was not a bonus.

I also began to see signs that had been put up recently, declaring that wildlife management was in progress, and access was temporarily denied. Although these were on paths that probably didn’t lead to the hash point, I started to get a little concerned. I have no idea what “wildlife management” implies, but I did hear guns now and then, which is usually a good reason to take any “no trespassing” signs seriously.

At long last I managed to find a better path, and finally even the actual path I should have used, which was much nicer to walk on. Still, if I’d used that path, I’d never have had all that fun stepping over puddles and sliding on mud and dodging raptors and staring at ominous signs. It would have been… well, too easy.

Of course, it wasn’t.

Across the track, just 260m from the hash point, was a gate, secured with chain and padlock, and bearing a “no access” sign. It was one of those signs where a strange cartoon figure is holding a hand up into your face, and the whole thing has a red line across it, so actually its real meaning is “IT IS FORBIDDEN TO PREVENT PEOPLE ENTERING!” I’ve always considered this sign extremely badly designed and illogical. Someone just took a load of stuff that suggested the idea of not being allowed to do things, and threw it together without any consideration for the relationships between the parts. It’s like the graphic design equivalent of “I could care less”. Sadly, the signs are now everywhere, despite the availability of a perfectly serviceable “no entry” sign that is internationally recognised, much simpler, and logically irreproachable. 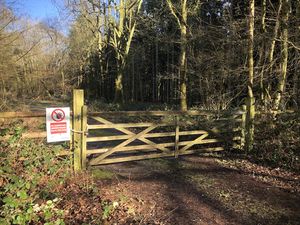 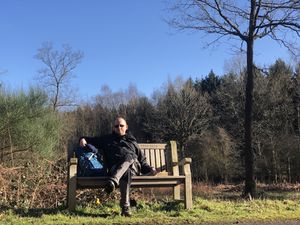 So there it was. My first hash after returning from a six-year hiaitus was to be a CNR and No Trespassing Consolation Prize. I didn’t mind much, though. It was now quite a sunny day, and even the bench was dry enough to sit on. It was one of those lovely memorial benches, dedicated to the memory of Sue Shears – and a brass plaque beneath the inscription added “Tess, her loyal collie”. Thank you Sue and Tess, for a place to rest.

It looked as if nobody was going to turn up for the meetup, so after a quick picnic I checked the weather again. There were a few showers possible soon, so I made a marker from some twigs, left it in front of the gate, and set off back to the car, this time very sensibly taking the route that was twice as long, yet twice as quick due to having less resemblance to a Jurassic swamp.

The best thing of all was still to come. There were deer running through the trees! And I mean dozens of them, all in a long line, and so graceful. It was like watching a time lapse of the Elves leaving Middle Earth. I got some good video, which I’ll upload to YouTube at some point.

All in all, a pretty enjoyable trip! Here are some of the things I overlooked when packing:

UPDATE: I've added Sue Shears's bench to a web site called OpenBenches - my thanks to Sermoa for the tip!