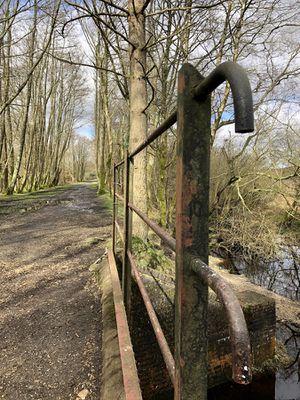 Macronencer (talk) plans to go, probably mid-morning as the weather looks best then.

Sit, hobbits! Sit! We is going to tells you all abouts our quest for the Precious, oh yesss. First, we hitches a ride. We stows away, we does, on a cart. Gollum! And the cart stops at an old travelling place, very old, very ancient, and full of elveses eating horrid things like cakeses and bunses and cups of tea. Yuck! They wasn’t selling any juicy sweet fishies my dear, oh no my precious, no.

We knows where the precious is hiding, hobbitses, oh yes we does. And we quickly goes up, up, up the path to find it. But it doesn’t look very nice, no it doesn’t. It looks all swampy and squidgy and full of orcses and maybe alligators too. And so we runs ahead quickly to see if we can find a way through. And we runs all around a big forest, all around the edge. And the other side looks all right, yes it does, it looks fine, all dry and easy. But it wasn’t, precious, oh no, no, no. Gollum! It was TRICKSY and WET. And we tried to cross it, we tried and tried, but it wasn’t like the Dead Marshes at all. We didn’t know the way. We forgot. And we tried to go another way round, by a little brook, even though there was a bridge and there could have been trollses hiding there, because trollses likes to hide under bridges. But we had to try, we had to! And the precious was still too far to reach, and we ran back around the woods, and there were people there. Elves and Men, and little hobbits riding on wheels and poking sticks into things. And Smeagol doesn’t like being poked, so he ran, he ran all the way out of the wood.

And we still doesn’t have the precious! And tomorrow it will disappear and appear somewhere else, and Smeagol doesn’t know where! And all there was to eat was horrid taters and leekies and cockasoup. Gollum!

Oddly enough, my experience was very similar to Smeagol’s. I had no idea the rascal had been there before me, though obviously he’d long gone when I arrived… unless he was hiding, waiting to ambush me if I reached the Precious, that is.

I parked at the Old Station Tea Rooms, which is a nice little place with a great menu and good service. And I set off in high spirits, expecting at least to get close to the hash point. 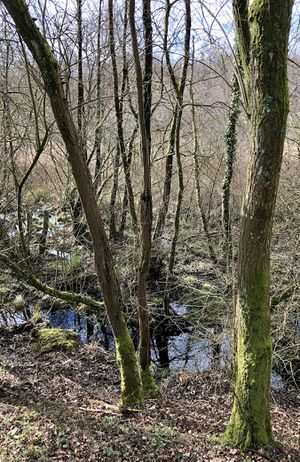 As soon as I looked to my left after crossing a small bridge, my heart sank. The place was a mangrove swamp! In the vain hope that parts of it might still be dry, I continued, trying to see how close I could get. It turned out that the answer was 77m. Bascially, this was the path of the railway that used to run through here (you can see the remains of the station platform), and I was on an embankment. Further down there was a track below me, leading to the left. I took it, hoping to circle round and find a drier way in. Some parts of the forest floor looked as if I could walk on them. I tried a few times, but each time I ended up almost surrounded by not just mud but an actual pond. As Smeagol said... just like the Dead Marshes. Eventually I found a stream that ran back towards where I’d started, and the banks on each side of it were quite high off the ground. Thinking I might be able to get closer that way, I started walking along the left one. The first obstacle was a fallen tree, and I’m proud to say I managed to climb over it. The second was another fallen tree, but this time there was swamp under it, and my boots were not up to the job. I really must get some waders... 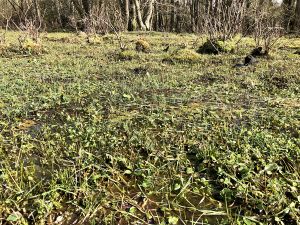 Admiting defeat, I turned back, and spent half an hour wandering up the original track and back. I found a very interesting-looking house, and also an artificial flower lying on the ground – a buttonhole, I think. Perhaps from somebody’s formal attire geohash? I picked it up to take home and throw away.

After rounding off the morning with a nice lunch of tomato soup and green tea (I recommend the Tea Rooms highly, very good!) I hit the road and returned home to write my report.