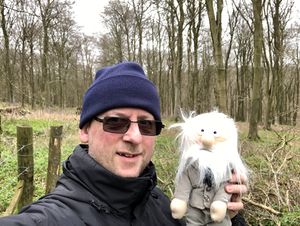 Macronencer (talk) is planning to visit this, as it looks to be near a path and hopefully all right to access. It's also one of two possible hashes this day, so going for a multihash.

This was to be an attempt at a multihash. I had a day off work, and I didn't see how I could possibly manage three, but two looked achievable, so I decided to go for it. The first important issue was footwear. My old Magnum boots, as worn by British police and prison officers, were on their last legs, and the damage along the toe of the left one explained a lot regarding the state of my socks on the last few hashes. 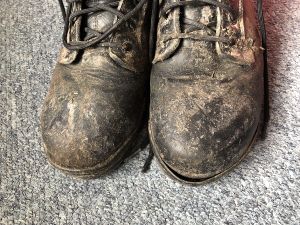 So I grabbed my "proper" mountain boots instead, which had last accompanied me up Mount Snowdon with my son. I also got my Wellingtons out of storage! I've learned from a few rather swampy locations that have unexpectedly popped up recently. I thought I'd try the mountain boots on the first hash, which didn't look too wet, and reserve the wellies for the one in the New Forest, which was actually right next to a stream and could be very waterlogged.

I took the A27 past Portsmouth and Chichester, then turned off to the left towards East Dean. I'd had a choice of two car parks, and the larger one looked better, but was farther away. However, I wanted to get more exercise, so I headed for that one.

There was a memorial bench there, which I will log later on the openbenches site if it's not there already.

The paths in the woods have a distinctive shape, which can be seen from the satellite image, and I almost took the right one but not quite! I reached the other car park, seeing one person put their dog in a car and drive off before I arrived. That was the only person I saw until I got back to the car, in the end. The bridleway continued the other side of a road, and I headed through a gate that had a chain over a post.

The path eventually opened out into a meadow. It was very quiet. I knew the hash was near the far corner, just in some trees, so I set off in that direction. Then I noticed a barbed wire fence running along the edge of the trees. I decided to give it a try anyway. But I was thwarted by the wire in the end. 11m with an 8m accuracy is not success! I then had to decide whether to climb over the fence. I decided not to. It looked brand new and I would have damaged it, plus it's really against the rules. 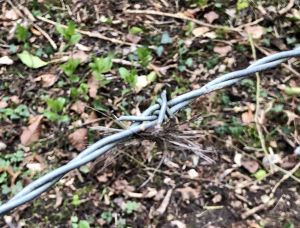 And, talking of barbed wire, I found a clump of hair on one piece of the fence. It looked like badger hair, except that it was pretty high off the ground and I couldn't see a badger being able to reach that high. I did wonder whether it might have been wild boar.

In the end, I went back down to the bridleway, and found another way into the trees, so to my delight I was able to reach the hash point at last! 3m with an 8m accuracy is a WIN! After the usual hashscot photos (and I forgot to leave a marker, arrgh!), I headed back. It was quite a long walk with a few steep hills, and I felt I was finally getting that exercise I had been craving. It was wonderful! Also, it had mercifully decided not to rain. The breeze in the trees made for a quite beautiful atmosphere, and I tried to capture it on video, but it wasn't really possible to do it justice.

So then it was back to the car to drive out west to the other hash point, in the Southampton graticule. I'm writing that report up soon!