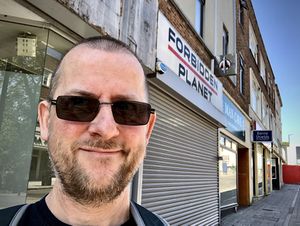 Macronencer plans to go, as it's literally right outside a shop he needs to visit, thus allowing for COVID19 lockdown rules to be (pretty much) followed. Yay!

I'd been waiting almost eleven years to actually do a geohash on Geohashing Day, and it seemed hopeless: COVID19 pandemic rules had so far restricted me to hoping for something to show up within a 30-minute walk or cycle ride of my house. Since my bike is currently locked in the landlord's garage and it would be awkward to ask for it while he's isolating as high-risk, that really meant walking, so it would have had to be within a mile or two. Worth hoping for, but not likely.

And then May 21st's hash point was calculated, and I saw that it happened to be literally a few paces from where I sometimes go shopping on Saturday mornings - a vegan grocery and supplies shop near Bargate, Southampton. It was an easy decision: I took the day off work (I'm working from home at the moment, but still... it seemed polite), and planned to do my shopping on a Thursday this time instead!

Even though a lot of people seem to be treating the lockdown rules pretty casually, there's still a big difference in the level of traffic on the roads, and parking was easy. I arrived about ten minutes before the shop opened, and it must have been the shortest GPS dance ever: I basically walked along the pavement a little way, and saw the waypoint distance flip to 1m. Excitedly, I took a screen shot. I was almost right next to Forbidden Planet, which was suitably geeky as a geohashing location, especially on Geohashing Day. It'll be Towel Day on Monday too...

So, not much else to say, really! I've finally managed my Geohashing Day achievement, and though I could have wished for a bigger occasion, perhaps with a few friends, at least it also happened to be my parents' diamond wedding anniversary, so it was a double celebration. Later that evening my siblings and I and all our families had a one-hour Zoom chat with Mum and Dad, and I drank a whole bottle of Prosecco - which was the first time I had touched alcoholic drink since March!

UPDATE: I have just noticed that this is my 42nd ever geohashing attempt. Even geekier! If only it had been Towel Day...