I will be at the hashpoint at 4 p.m. I'll probably walk there, as I'm still in my "walk along each and every street and path and dirt trail of Großer Garten park and even in between" project. That project happens on all free weekend afternoons since February and it's already been 87 km within that 2 km² park. With it, I'm preparing for hashpoints in the park so I can get the déjà-vu achievement.

The location is an "almost déjà-vu" location for me. I've never been at the exact spot but, since the location is near the city center and the main shopping mile, I've been all around the spot: I used the tramway 25m to the north/west and the road to the northeast/southeast/southwest (17 m, probably even the bike lane (15 m)); the city running event in 2015 went along the street north/northwest/west of the spot (45 m; the finishing line was 60-80 m north of the spot, according to the video I found on my computer). The geohashing expedition for 2015-08-03 51 13 passed west/north/east of the spot within 45 m, the tracklog link is broken though.

I started my Saturday walk at 14:20. My project plan for the day were the flower gardens (as opposed to forest and meadows) northeast of the park's center. Because the weather was very clouded, only few people were around, so I could walk in circles and along strange routes without attracting attention (people would think: "that guy has walked around these benches 3 times now, I think he wants to steal my purse"). After a while, the weather got worse and the announced rain started. It was not very strong, but wet enough, so I walked through the forest parts for a while and even stood under the puppet theater building's awning for some minutes.

Around 15:30 (after walking 4.5 km already) I started towards the hashpoint, closing some gaps in the project's tracklogs along the way. I left the park near the park railway's central station and walked along the Cockerwiese (a meadow named after the singer Joe Cocker, because he gave a famous open-air concert there in 1988 with 85000 guests). Then past the skate park towards the city hall, the tower of which was already visible straight ahead from Großer Garten. I crossed the last road and was near the hashpoint at 15:55. Finding the correct spot was easy. Taking a panorama picture was not, but I finally succeded. A few minutes after 4 p.m., I went to the Trümmerfrau statue in front of the city hall, then went back to the park. I didn't see anybody else at the hashpoint, but I had already left by 16:05 so if Etodo came later I missed him. In the park I did another 7 km of walking, now mostly in the southern part.

When we noticed the easy location of the hashpoint, we knew we had to go. Then we saw Danatar write that he would go to the location at 4 pm, so, attempting for another Meet-Up Achievement we decided to do that as well. Given the proximity of the hashpoint, we thought that it would be a great opportunity for several achievements: We were going to walk to the geohash, try for a Juggernaut achievement on the way to the hashpoint, take a different route back home, qualifying for a Tron achievement and, why not, because the hashpoint was on a small grass area in the middle of the city (i.e., a very easy to navigate area) we also went for a No Batteries Geohash.

To document our track and prove the Juggernaut achievement while not actually using any GPS device to navigate, Etodo started a GPS recording on his phone, which he kept in his bag all the time, while we navigated using a map and SuperGrobi took the photos.

We identified on a map which way we needed to walk to stay as close as possible to a straight line. The biggest obstacle was an irregular block near our starting point. As you can see on the tracklog, we tried to find a way straight through the block, but we were not willing to climb fences. So we settled for a small footpath which was slightly better than walking along the street but still our largest deviation. After that, it was smooth sailing: We went through a small shopping centre, past the train station and then crossed the (slightly curved) street twice to stay on a straight line. We also crossed the large intersection right before the hashpoint at places where it's not advisable, but in the end, we made it out alive. We arrived shortly after 4 pm, maybe at 16:09 or so. Unfortunately, we did not find Danatar, we must have missed him by few minutes. Next we took some time to locate the hashpoint (see the next section) and of course, we took a photo of our Stupid grin. We were a bit relieved to leave the area as there was a quickly increasing police presence due to a protest. We finished the expedition by taking a leisurely stroll back home.

To locate the precise location of the hashpoint without any electronic devices and just a compass, we drew a small plan indicating the distances and headings from the hashpoint to three easily identifiable points: A large guidepost, the point where a cycling lane split, and a tree. We did this using Openstreetmap and satellite data in JOSM, which was definitely not made for this. On the grass area, we found a wooden plank which we found to be roughly 1 metre (a plank length...) long and used to find the hashpoint, starting from the signpost. Then we used the compass to measure the headings to the three landmarks to confirm our location. Of course, this is not completely precise, but neither is GPS, and we are confident that we arrived within few metres of the hashpoint. In fact, the GPS track we recorded confirms the fact that we arrived at the hashpoint.

Since we went back and forth a bit trying to find the perfect way to cross between the houses, we did not quite make the Tron achievement. But there will be other opportunities, and it wasn't that impressive, anyway. 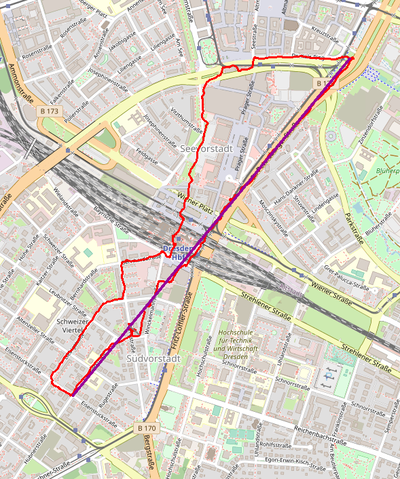