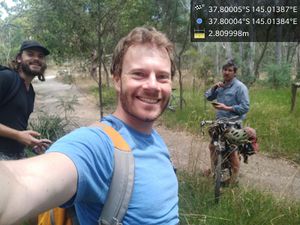 On a path next to the Yarra River in Abbotsford.

Another delightful geohash! I drifted awake at 1:30am with one thought firmly in mind: where was the day's geohash? If it was far away I was prepared to get up at the crack of dawn or earlier and make a dash for it. But amazingly, it was one of the closest and nicest I'd seen in ages! I decided not to alert the Geohashing Gchat group so others would have the pleasure of discovery.

Later that day, the same geohashing congregants as were assembled at 2022-02-09 -37 145 all decided to conglomerate together at the hash. John was walking/jogging from Footscray - no mean feat. I headed off and met Stevage outside his house in Fitzroy North.

It was an easy ride, some creek bike paths and a pedestrian suspension bridge, and then we were there. John had been waiting only a couple of minutes (he says). We took some photos and spent a good hour talking politics over a few beers by the river, watching the cormorants dive for fish and ducks float by.

For Stevage and I at least the trip home was uneventful.

This was my fourth hash in a row. Hopefully we continue in the hash-gods' good favour.

The spot was pretty amazing for me: a place in Yarra Bend Park that I have visited many times during lockdowns, for picnics, for sitting by the river, for walks, bike rides. Honestly couldn't believe how ridiculously good the location was.

Just after we arrived at the point, a couple of people with 4 or 5 greatly varying dogs turned up, including some kind of gigantic sheepdog wearing a muzzle. They had a quick swim and dried themselves all over us in the traditional coat-shaking way. Ah, dogs. Stevage (talk) 05:38, 11 February 2022 (UTC)

I have definitely been to this exact spot before, as evidenced by my Strava heatmap. Sometime in 2020, not sure when exactly. 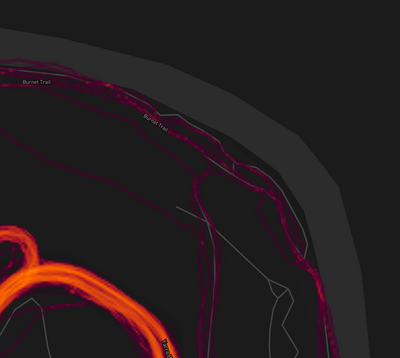 I think that big shaking dog was a Newfoundland.

This one was going to be almost too simple to get there by bike, and since I was planning on going for a run anyway that day, I thought I would try and run to the hash! It was conveniently a little cooler than it had been in previous days making it not seem too intense to jog the 11ish km that was required. I headed off, going through Newell's Paddock, crossing the Maribyrnong, then heading through Kensington, North Melbourne and Parkville, steadily climbing. I reached the apex of my journey crossing across Melbourne Uni via Tin Alley, then it was all downhill along Elgin St, continuing as Johnston St, before eventually reaching the Yarra. I had to climb again slightly on what had become Studley Park Rd, before I was able to head down into the park. By this point, my left knee was really starting to ache, it having been a bit dodgy for the past few weeks, and the steeper downhill into the park was too much for it, so I had to mostly walk the last little segment through the park to reach the actual hash. I had forecast an arrival of 1:30ish for Felix and Steve, and I would have got very close to that if I hadn't had to walk most of the last km, but as it turned out, I was still the first there at 1:35. Felix and Steve, were along very shortly though, it really being only a minute or so later that they arrived.

After after a delightful sit down and a beer by the water's edge, it was time to be on our respective ways again. I had been planning on walking back to Victoria Park Station to get the train home, but as I started walking back I seriously contemplated having a go at walking all the way home, my knee seemingly coping fine with walking. A return trip of almost 23km would have put me in the top ten for longest walk geohashes, but I did some calculations and worked out that I unfortunately didn't have the time to spend on such an attempt: I had to be home soon enough to get ready to head out for the soundcheck for the gig that I was playing that night. So I did end up just walking back to the train station, and getting home with plenty of time to spare. I still clocked up 15.18km of walking in total, once I had got to and from the train stations at either end, and got from platform 1 all the way across to platform 12 changing trains at Flinders St.

Not pushing my knee too much more was probably the right decision in the end; when I got home and had a shower and had cooled down a bit my knee seized up and I was really struggling to walk. I popped a couple of ibuprofens, and hobbled off for the bus stop to get to my gig, but thankfully within a few hours I was back to pretty normal functionality. And shout out to Felix for supporting us by coming along to the gig too!

Worked from home (this hash was extremely close to my usual commute) but nipped down after work. Realised half way home I could avoid crossing my tracks so I rode the nice long way home to get the Tron achievement. Not much else to add, it was a great spot!