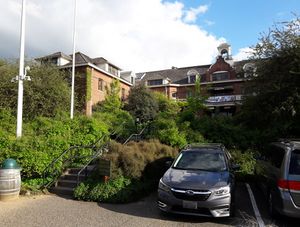 In the hotel at McMenamin's Edgefield, outside of Troutdale.

We began preparing for this expedition in the summer 2003, by getting married in the hotel at McMenamin's Edgefield, outside of Troutdale. Here is a picture from that day of us with the extended 5000 family on the east second-floor balcony, about 10 meters from the future hashpoint. 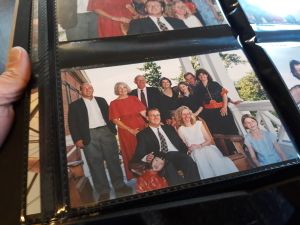 After that, the next steps were to wait until geohashing was discovered, and then to be standing by ready to check the local hashpoints on the morning of May 16, the 6,855th day of married life.

Having done all that, we were ready after work to drive out to the Edgefield campus and to wander around the familiar halls of the hotel. It's a three-floor building with a basement, so we reached the hashpoint (in the hallway of the building's east wing) on the first floor, then again on the second floor, and then again on the third floor, and then, give or take a couple of meters, in the basement.

In addition to the arbitrary travel of geohashing, we also enjoy the arbitrary travel of the McMenamin's passport -- McMenamin's being a chain of pubs and resorts, many of them in restored historic buildings, throughout western Oregon and Washington. To finish the Edgefield pages of our passports, we had some cider at one hotel bar and then shared a wine flight at another hotel bar, and after that -- possibly talking a little louder than usual -- we stumbled over to get dinner at the Power Station restaurant. This was the second expedition to end up at the Power Station this month, since it's the same place we had dinner with the Frogman a few weeks ago, after 2022-05-03 45 -122.

Meanwhile, in Israel, Yerushalmi and Mrs.Yerushalmi visit a hashpoint right by where they got married: 2022-05-16 31 34.