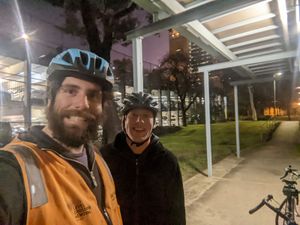 Next to a housing commission block of flats in Fitzroy.

This point, probably accessible, in inner Melbourne was bound to attract attention. It was situated within a few hundred metres of the workplaces of no less than 3 Melbourne geohashers - yet sadly none of them was actually attending their workplaces on that Tuesday. The rest of us would have to step in. 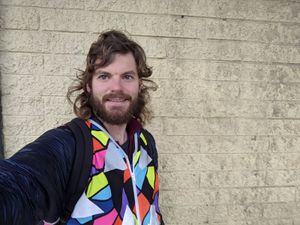 With other plans for dinner already in place (involving kimchi), I was going to be unable to join in with the geohash/pub plans in the evening. So I set off on my bike towards the hash in the early afternoon. I reached the vicinity without difficulty, but it was a little bit more fiddly locating the hash itself. Some maps put the point just within the block of flats, while some satellite imagery seemed to put it just outside the building. Making matters more difficult was that the path along the edge of the building was covered by a metal roof, which seemed to significantly affect the GPS signal when standing under it. After several minutes and several approaches from several different angles, the closest I had got my phone to read was about 1.5m. I decided that was close enough.

In the geohashing chat there had been some discussion about trying to reach the hash via the roof of the building in the event that the point lay within the building's footprint. I contemplated this, but the entrance had someone monitoring the door at all times, and I didn't feel like trying to talk my way in, followed by trying to gain roof access which was very far from certain. And gaining access to the hash on any internal floor inside people's apartments seemed even less likely.

So I declared it a success anyway and continued on my way. I went home via the city, where I bought myself a new Garmin running watch.

Lachie and Ed made it there.

Ed: I finished work for the day in Carlton, cycled a very short distance past the Melbourne Museum and thereafter found myself quite easily at the hash point. It turned out Lachie had independently arrived there around the same time as me. Then we went to the pub.

I took the train home from work near Cranbourne at 5:15, got off at Parliament Station and rode to the hash - about 7 minutes.

I did the hash-dance to get a good reading, satisfying myself with 1.3m (it was close to a wall) and tried to take a photo.

Unfortunately, my camera shut down right at that moment and it took about 5 minutes to turn it on again, which I needed to find out where the pub we were going to was.

At last, the phone worked and I navigated myself to the pub. I locked up my bike, ran in, looked around, couldn't see anyone, ran upstairs to the accommodation, and ran outside to my bike. I looked back at my phone. Everyone was on Google Maps, right inside. I looked closer at the pub and I could see there was a beer garden out the back, so I looked through the fence and saw my buddies.

So I ran back in, waited 5 mins to order a pot of peanut butter porter, and met everyone outside. We talked briefly about creating life from donated genetic material and Eratosthenes of Cyrene's measurements of the planet's circumference before I had to rush off again to attend a meeting on Zoom at home. 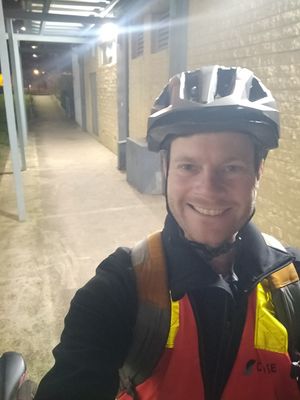