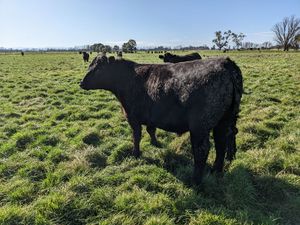 In a cow paddock just north of Sale.

My occasional geohashing buddy Reggie (who joined me on 2022-01-13 -38 146) was attending an event near Heyfield, so I thought I'd tag along and while he was warming up, nick out for a quick ride to the nearby Sale hash.

After the major triumph of knocking off the Tidal_River,_Australia graticule during the 2022-07-11 -39 146 geohash a few weeks ago, I was keen to get this other elusive graticule in my home Gippsland region.

It was a flat ride, with quite a few long & straight sections that cause the rider to wonder if they're making any progress at all. Add a stiff headwind on the return leg and it's safe to say it was not one of my favourite rides.

The hash itself was a couple of paddocks deep in a cattle farm. The most obvious access gate was padlocked, but I found an easy-to-cross section of fence further down the road. From there, it was an easy walk to the paddock.

There were a lot of steers in the paddock, including a few who seemed a little unhappy that I had wandered in amongst them. Some started to run at me, but steered away (hah) when I shouted and waved my arms.

Having moved the one fella who stood right on top of the hash, I got my proof and got out of there, and made it back to see Reggie perform with great skill. 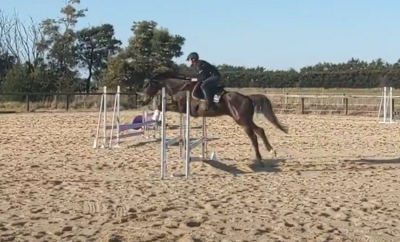