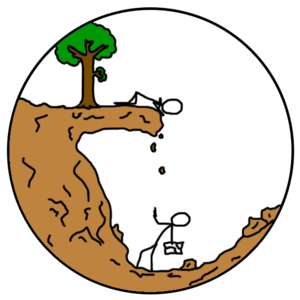 Add this ribbon if you reach a geohash below sea level!

This ribbon is displayed by the people who have attended the geohash with the lowest terrain elevation. Geohashers who attended a low altitude geohash which is superseded by another at a lower altitude get to keep their ribbons. Underwater and underground geohashing are eligible for this award.

Anyone who can reach a hash within the top three or below 100 meters below sea level should put their hash down for an honorable mention.

There needs to be a proper discussion about what constitutes proper proof because altimeters are usually not so accurate. It's better to take official data.

Azijn & Friends achieved the Geohash for 2008-07-26 at 5 metres below sea level, in the Almere Polder. If you did a low geohash that was earlier, or a subsequent geohash that was lower, take the ribbon, even if it has expired. Enter your information in the appropriate line of the table and please also update the "currently" number on the Achievements page.

According to this site http://geology.com/below-sea-level/, the second lowest depression in the world is in Djibouti at 155 meters below sea level. That means that in order to pass the current record without doing anything drastic, a hasher must go to the Dead Sea Depression in Israel and Jordan.

Retrieved from "https://geohashing.site/index.php?title=Low_Geohash&oldid=776919"
Category:
This page was last edited on 24 March 2021, at 17:20.
Privacy policy
About Geohashing
Disclaimers