Next to the River Frome near Dorchester

This is Macronencer's Displaced Origin Geohash for this graticule, and he attempted to reach it as it looked easy enough...

Macronencer plans to drop by on a round trip that also includes a standard hash near Winfrith Newburgh, just 15 minutes away by car.

"The best-laid plans of Mice and Men gang aft aglug."

I’d just completed my standard hash down in Winfrith and was feeling quite mellow. Driving to Dorchester took only quarter of an hour, and I found a little car park with ease, where the charges weren’t too high. Sadly, I hadn’t brought any cash and the app they recommended for paying didn’t work… so I ended up phoning one of those tedious pay-by-phone lines, which took at least five minutes, perhaps ten.

I made my way up to the High Street, as I’d planned to get the retro hash before lunch. A sign outside the Teddy Bear museum showed that they also hosted an exhibition of Terracotta Warriors. I hope they don’t get them mixed up. Actually, having recently re-read The Tao of Pooh, I immediately saw the sign as a juxtaposition of Taoism and Confucionism (which sounds much more pretentious than it actually is). 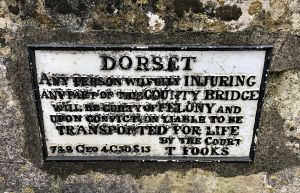 Near the footpath was a lovely stone bridge, bearing a sign warning that people “injuring” the bridge would be subject to “transportation” (probably to Australia), by order of someone named “Fooks”. So that’s them fooked, then. I’ve no idea how old this sign is, but it has to be over a hundred and fifty years. 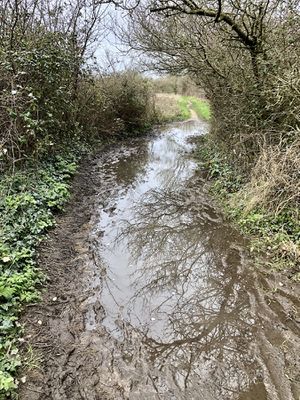 As I made my way along the path, I encountered a longish stretch of alligator swamp flanked with snapping velociraptors. This didn’t bode well for later, but I bravely negotiated it without slipping over, and reached the other end, whereupon I saw that the River Frome had flooded quite badly up ahead. Since the hash point was on a footpath right beside it, I realised that my chances were now looking slim. Sure enough, after crossing a sluice bridge, I found myself confronted with a stretch of water too deep to traverse in mere boots. 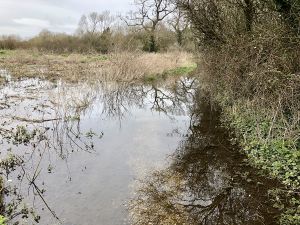 Even wellies would have been unequal to the task. Looking again at the map, I realised that this wasn’t even the path that held the hash point! It was one that was further away from the river. The path I should have taken was basically now beneath the river, so much so that I hadn’t even spotted it and had taken the other one instead.

So, there it was. A Retro Hash CNR. Damn. Never mind, I told myself. There would be lunch, in Reloved, a café I’d found on Happy Cow earlier. So I returned to the car and changed my boots, then walked down a couple of blocks to find it.

The café was closed. It shouldn’t have been closed, according to my information, so I’m not sure what happened. Perhaps it was something to do with COVID-19, the novel coronavirus, and people staying at home when they feel sick. Whatever the reason, I thought it was time to leave so as not to arrive home during rush hour.

On my way back to the car I passed Potter’s Café and Fudge’s Wool Shop. I couldn’t help wondering whether the Minister for Magic had been stationed there to keep an eye on Harry. I also looked around for a Wool’s Fudge Shop, but was out of luck.

I think Dorchester would be a nice place to return to in the Summer when the hash point is available, and I didn’t get to explore everything. In particular, I’d like to see the dino bear and teddysaur museums.

Watch this page! I’ll be back.

No achievements, though several would have been possible, had this been a normal hash instead of a retro - mostly relating to the environment!