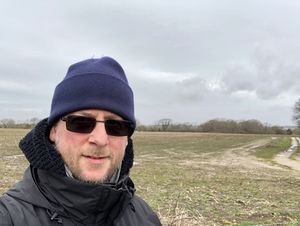 Just inside a field off the A352 near Winfrith Newburgh

Macronencer (talk) plans to drop by on a round trip that also includes a Displaced_origin_geohash_achievement near Dorchester. Probably this will be in the late morning, as the afternoon weather forecast is looking a little soggy...

Update: now planning to park by the church at Winfrith Newburgh 50.6589032,-2.2774992 - there's a footpath that goes past Wynards Farm and leads to the hash point. Much nicer than parking next to a busy road on the actual entrance to the field, and kinder to farm vehicles who might need to use the turning. --Macronencer (talk) 08:49, 9 March 2020 (UTC)

I set off at around 0904 and had a very pleasant drive down to the Weymouth graticule. The last time I hashed in this graticule it was Halloween, and Sermoa and I had brought pumpkins with us to a very low longitude fraction, almost at the eastern boundary. This time I was heading further to the southwest, to a village called Winfrith Newburgh. The name “Winfrith” clearly derives from the name of the river, ‘Win”, which runs through the place, alongside the roads and under bridges that form people’s driveways. I’ve always loved this arrangement, and it seems quite common in England. As for “frith”, I’m not too sure, but there’s this Wikipedia entry, which seems to suggest that it means a place of peace. That certainly fits, given my experiences there. 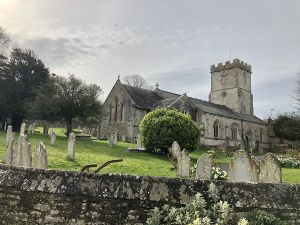 I parked by the church as planned, without incident, unless you count some difficulty lacing my boots. In the eleven years since I began geohashing, I’ve developed a bit of arthritis, which is quite annoying sometimes. Roll on, human cyborg options, you can’t come soon enough!

It was an easy walk over the hill along a footpath to the hash point. I had some idea what to expect, and had already considered how I would react if the field had a crop or anything like that, though it’s pretty early in the year. Sure enough, the field was just mud and old stubble, which was fine. It was right by the busy A352 road, and I felt a little exposed as I cavorted on the grass verge (I was shooting time lapse, doing experimental video footage for a compilation I’m planning, picking up geotrash etc.). But nobody so much as slowed down to give me the once-over.

Reaching the hash itself was pretty straightforward, though it would have been easier had I remembered that MotionX can be configured to show the remaining distance in metres! I did quite a long GPS dance, while the display persisted in showing “0.01km”, which was annoying as hell. At one point I think it did flip to 0.00, but I wasn’t fast enough with the screenshot. To be honest, I moved around so much that I’m sure I was on the hashpoint at some time, even though my screenshot says “0.01km”. I’m calling it a win, and in future, I’ll set it to metres! Also, MotionX has an annoying drawback, in that it doesn’t seem to allow the current position to be shown on the Compass view. I later realised it shows both the position and the distance remaining on the map view, and again, I’ll make sure to screenshot that in future.

There was plenty of trash on the grass verge, as lots of people are nasty beasts and just chuck things out of their cars. I got at least 2/3 of a black sack full. I also forgot to get my hashscot out. D’oh! Next time.

After returning to the car, I set off for my Retro Hash in Dorchester, which was a mere 17 minutes away. All in all a pretty overcast sky made this a chilly and dull day, but I enjoyed the bracing walk anyway, and was happy to get another expedition under my belt.

Addendum I found out that MotionX allows custom fields. Using these, I've replaced the altitude (elevation) on the "My Position" screen with "Waypoint Dist(m)". This should allow me to get proper proof of co-ordinates reached in a single screenshot. Finally sorted it!