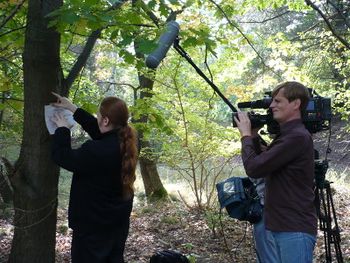 TV crew at the hash. Woo!

Trivia: The cat's meow belongs to Audrey, who was puzzled by the strange people in her apartment.

Woo! We made the TV! Unfortunately I've got typers neuritis and can't shouldn't write so much about it. Documentary airs on thursday late night, in Polylux magazine, to be published online at polylog.tv around midnight. Will upload photos, and wait for the others to tell their stories. -- Relet 14:50, 29 September 2008 (UTC)

When the hash coordinates came up on Friday, we were a bit disappointed - we had hoped that the hash would lie inside the city limits of Berlin or at least within reasonable distance to a train or bus station. It turned out that the (52,13) hash for Monday was in the far southeastern edge of the graticule right in the middle of nowhere (no town, no train, no bus within reach) and getting to the final location would have most probably meant crawling through a dense forest. No way would we venture there in Formal Attire (as we had initially hoped).

But what at first glance seemed like a catastrophe offered us a great choice: we now had four graticules to choose from for our Polylux adventure, each of the hashpoints being about the same distance from the city centre. The hash for (53,12) was in the middle of nowhere, too, but at least not in a forest. The hash for (53,13) fell into the town of Angermünde into a small patch of wood between two houses, but we had concerns whether that might be on private property. So we settled for the one in (52,12) near the town of Jüterbog, much to relet's enjoyment because he already knew the nearby Fläming Skate area (he had been there before). Lu Yen and her team agreed to our choice and promised to order a taxi to take us from Jüterbog train station to the vicinity of the hash and back (not truly altruistic, I guess - they had to carry the heavy video equipment and were definitely even less eager to walk 5km). On the downside we were told that we would have to visit the hash early in the morning due to their otherwise stuffed schedule.

Well, place and time had been decided, satellite images downloaded, the mandatory "The Internet Was Here" sign prepared... fast forward to Monday morning.

I set out at 7am to meet the others at Berlin Hauptbahnhof; Lu Yen was probably already at relet's place, talking things over with him, making her first recordings and then also heading to the station. Yet when I arrived I only found Sneak. While we were waiting for the train and the other travellers to arrive, Lu Yen called and told us that they were late und would probably miss the train - which in the end they did. Well, it wasn't us who had the tight deadline, so we enjoyed the chitchat and the calamity of an extra hour at the station. We did continue shooting a few scenes and some of us had a second breakfast, though.

One ride, a first interview and a couple of curious looks from bystanders later we found ourselves in front of the station building of Jüterbog. It took several attempts to get a decent version of the arrival scene on tape, due to (among other things) the occasional passing car, our lack of memory in which order the three of us had lined up in the previous shot, the camera still being switched off etc... I counted six takes? Finally we hurled ourselves into the promised taxi and went to the neighbouring town "Altes Lager". There we got off again and walked west on Birkenweg past near-abandoned tenement blocks. At the end of the street we were warned by several signs that we were about to enter a former military area which might be potentially dangerous due to scattered ammunition parts and similar undesirable things. We felt pretty safe though, because the cameraman Ingo was always running around us, in front of us, in the bushes on the left, behind a young fir on the right... where we set our feet he had likely already been.

200 metres into the weed-infested grassland we found the beginnings (or the remains) of a tiny hut that someone once had started to build here... this reassured us of our path as it had likely been trodden quite a few times before. Not much further, right after passing the first trees of what doesn't really deserve the title "forest", we reached the coordinates and performed/celebrated the usual ceremony: we took pictures of each other (Stupid Grin[tm] included), taped the xkcd sign to a tree and helped relet hide GeoHashFlashCache #6. We completed the video footage with another lengthy interview (leaving the Kobalt crew with about 45 minutes of raw data which was to be edited and cut down later to about 5 minutes) and then set out for the way back.

We took a different path out of the small forest and suddenly stumbled across something terrible, something that arouses anguish and horror even in seasoned geohashers: raptor bones[1]. We weren't interested in finding out whether all raptors who presumably fought here for leadership died in the fight or whether some of them were still alive, so we only had a quick glance at the nearby bunker remains (with authentic cyrillic letters on the concrete) and hurried without turning back to the place where the taxi was waiting for us.

We were back at Jüterbog at about noon, just in time to catch the 11:54 train to Berlin. Our journey back was very relaxed and we chatted some more while Lu Yen already mentally prepared herself for her second interview later that day. At Berlin Hauptbahnhof we wished her and her team all the best and they quickly headed to their next appointment.

Now it was about 1pm, we had had very little breakfast and hadn't joined in on the second breakfast of the Kobalt crew during our stay in the morning, so we decided not to end the geohash meeting without having lunch together. After some consideration we chose the "Schwarzes Café" at Savignyplatz - one of the few locations in Berlin that are open 24/7 (if not the only one). We had a wonderful time there (thanks Sneak for generously inviting us!) and finally parted ways at a quarter to four.

Conclusion: What would have otherwise been a quite boring hash journey (the spectacularity score of the landscape was again close to zero, decaying barracks and concrete jungle are rated rather poorly on my scale) turned out to be lots of fun. Who cares that we had to reenact many funny spontaneous conversations because the lighting wasn't right, the mic not ready or the camera on standby! I didn't care. Thanks to Lu Yen and her team for joining us, you're always welcome to return for another geohashing adventure. (We'd be glad to have a few more active hashers in Berlin!)

[1]: Raptor bone photos have been shot by Sneak and will follow soon.

There's not much I could add to that. :) We met at half past six in my flat, where we shot the first scenes, and Lu Yen and Ingo suffered badly being allergic to my cats. Sorry for not warning you, I just didn't think of that. They filmed the preparation and I had to pretend planning our expedition with actual paper maps. Everything took a little longer than expected, so that we managed to miss the first train we had planned for. The next one would be in an hour. Coincidentally, Lu Yen also forgot her bag in my apartment, which we had now time to fetch, and to drink some more coffee at the station.

link to gallery, see comments there.

Any opinions? Will that work for you?

Planning acked, taxi needed. It's quite important to me that we're back around lunchtime because I've got some errands to do at university - but with a taxi that'll be alright. Hessophanes 16:55, 27 September 2008 (UTC)

We should also maybe try to bring some hash marker.. I could print an A4 sheet (google marker or "The Internet was here (and dragged Television along)" in colour, but if you're good at fabricating signposts, please speak up. :)