The 48 8 Geohash of Saturday, January 31st 2009 is located in a field near Neuburg am Rhein. It's a 1.5km walk from the Neuburg train station. As remarked by Ilpadre, you won't find that many 48 8 hashes in Rheinland-Pfalz, as this graticule only has about 25km2 in said state.

I'm planning to visit this hash. Since I have to work in the morning, I plan to go there in the late afternoon. I'm not yet exactly sure, until which time I have to work, also I have to be back in Karlsruhe before 19:00, so I don't know yet, when I arrive at the Hash and if I even make it at all. I'll try, though. Here's my planned schedule: 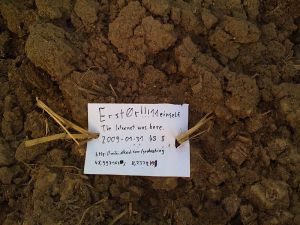 Now the Internet has been to Neuburg, too. 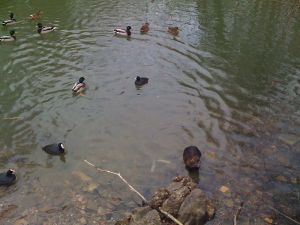 An otter and several ducks and coots in a Rhine branch

As opposed to my original plan to start the expedition at 15:37, I started about an hour earlier, which in the end was a good idea, since it was already getting dark on the way back today.

I started at Durlacher Tor, after storing my laptop and books at the University, boarded the S4 to Karlsruhe Hauptbahnhof, then took a Regionalexpress to Wörth and a Regionalbahn to Neuburg. After a 25-minute walk, during which I watched some ducks in a Rhine branch and rode a aerial ropeway on a playground, I arrived at the Hash. At the Hash, I took some photos, edited the wiki and visited the IRC channel. After a while, I realized, I should go back to the station, if I didn't want to miss my train and wait an hour for the next one. At 16:51, I took the Regionalbahn back to Wörth, then changed to the S5 light rail to Kronenplatz.