The Atlanta coordinates were in a backyard in the Northeast corner of the graticule. So we decided to check some surrounding graticules and found that the coordinates for Auburn, Alabama were on the side of a road a few miles off of I85. This made it a really good hash towards the completion of our Minesweeper ribbon for the Atlanta graticule. We had the time, so we left around 12:45. 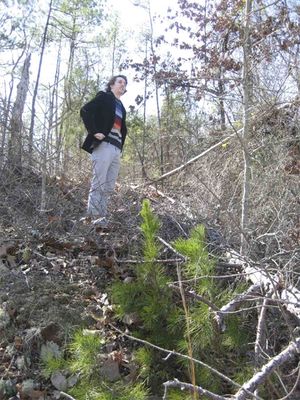 Nick at the hash.

The distance to the hash was 75 miles. Luckily, more than 70 of those miles were on I85, so we made good time. Another GeoSquishee was attempted, but both gas stations we stopped at came up short. Undeterred, we drove on towards the point. Our final approach was a straight road, and as we closed in on the hashpoint we climbed a rather steep hill. As luck would have it, the hashpoint was right at the very top. We parked the car, then climbed up an embankment on the side of the road to get to the exact spot. It held a somewhat breathtaking view of the surrounding area, and proved a very fitting location for the graticule's first successful expedition. We took the necessary pictures, then got out the chalk.

With Chris perched on the hashpoint and watching for cars, Nick chalked 'XKCD' in rather large letters on the road. Yes, it was readable if you drove over it. We also wrote on some other surfaces, hoping someone might see them before the next rain washed them away. And picked up some more trash. Then we headed back to Atlanta with another virgin-minesweeper hash on our record.