The 48 8 Geohash of Wednesday, March 4th 2009 is located on the Fremersberg, a 525m mountain in Baden-Baden. The Hashpoint itself is at 440m, a few hundred meters south of the summit.

The nearest bus stop is called Entenstallhütte (weird name, literally translated it means "duck-stable-cabin). Bus 216 goes every 30 minutes during daytime, so it should be ne problem getting there. I'll be there somewhat around 15:00/16:00. From the bus stop, it's another 1.5km by foot on paved road, from there, 200m unpaved road/no road. 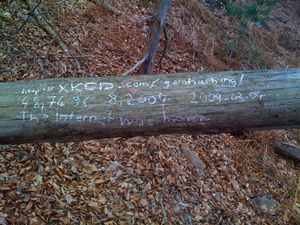 I left Karlsruhe on 14:10, the Regionalexpress brought me to Baden-Baden. Since I had to wait 15 minutes for my bus to Entenstallhütte and the Baden-Baden station is not that interesting, I took bus 243 to the inner city. I walked around for a while, took some photos and then continued with the 216 bus to Entenstallhütte. The walk to the Hash would have been easy, if I'd simply followed the paved road as I originally planned. However, I thought I had found a shortcut, a small footpath, that turned out to be blocked by fallen trees. So, screw roads, I just went straight uphill towards the Hash. At the Hash, I found another fallen tree that turned out to be very comfortable to lie on, so I rested for half an hour, then continued towards the Fremersberg's summit. I also climbed the radio tower on which I was rewarded with an amazing view. If there would have been no fog, I'd have been able to look over the complete Rhine valley and the Black Forest. But it still was nice up there. I then headed back, took the 17:20 bus to Baden-Baden station, then the 17:53 S4 to Karlsruhe.

Here's the GPS-Track (.gpx, .kmz, in Google Maps) of my ascend from the bus stop to the hash. Try to find the point where I said to myself "Screw the roads, just go straight uphill" ;)