In graticule 49 8, the Geohash of Monday, March 16th 2009 is located at the Erlichsee, a lake near Oberhausen-Rheinhausen, a small town between Mannheim and Karlsruhe. The next train station is Waghäusel, about a 3.5km walk from the Hashpoint. The Hashpoint itself is on a peninsula in the lake, according to the Google Maps satellite and OpenStreetMap, it's on land, according to Google Maps, it is at the edge of the water, so I'm not really sure it can actually be reached by foot. Also it might be private property.

As the Waghäusel station is both in the VRN and KVV Verkehrsverbund (don't know, if there's an English translation for this), Hashers from Mannheim/Heidelberg might also consider going on this expedition.

I'll take the Regionalbahn to Mannheim. It departs at Karlsruhe Hbf at 14:25 platform 2 or at Karlsruhe-Hagsfeld at 14:29. I don't know yet, where I get on the train, the Hagsfeld station is actually closer to my house, but as I'll write an exam again this day (let's hope it won't get delayed again), I might also go via Hbf. The train arrives in Waghäusel at 14:48, giving me plenty of time to walk to the Hashpoint. 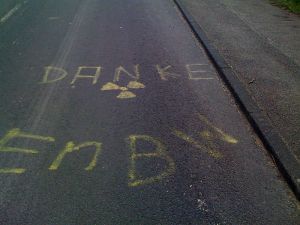 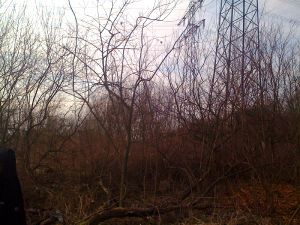 What I thought to be a recreational area. Lots of bushes, scenic electrical towers and lots of Garbage on the ground (not visible). 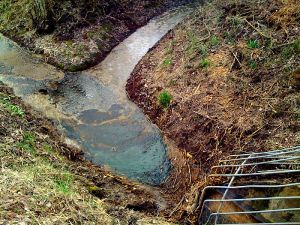 A somewhat polluted creek near the Hashpoint, not related to the power plant, but still, it didn't look too good.

As planned, I took the 14:29 Regionalbahn from Hagsfeld to Waghäusel, arriving at 14:48. I then walked about 2.74km to the Hash. Based on my pre-expedition research, I expected the Hashpoint to be in some kind of recreational area, a swimming lake or something. Instead, I found lots of cut down-dead trees and bushes, very scenic electrical towers and powerlines righr above the Hash and lots of trash. With the knowledge of the Philippsburg Nuclear Power Plant only a few kilometers away (in fact, I saw it on the way, check the photo gallery), with all the trash lying around, when you actually expected a recreational lake, it felt kinda creepy for a moment. I stayed at the Hash for a while, then took some of the trash (only a hand full, since I couldn't find a bag) and headed back to the station.

Here's the GPS-Track (.gpx, .kmz, in Google Maps) of my 2.74km walk from the train station to the Hashpoint. I took the same way back to the station. You may notice, that there are parts of the track missing, that happened, when I quit the GPS-Tracking App to the a photo or check Google Maps for directions.