Today's Hashpoint is located in a field about one kilometer south of Karlsruhe's suburb Grünwettersbach, formerly a small village, which has been merged into to city of Karlsruhe in 1975. 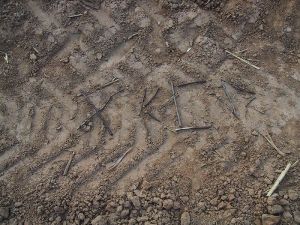 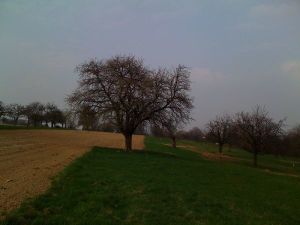 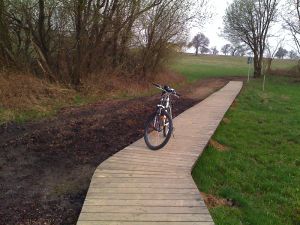 I'm planning to visit this Hashpoint in some way or another. I'm currently thinking of going for a sunrise expedition by (Night-)tram/bus or an expedition during the day with my (finially) fixed bike for my first bicycle expedition or any variation thereof.

With by plans for the sunrise expedition failed, due to me being too tired, I'll go for my first bicycle expedition this afternoon.

Note: This is a just a short summary of the expedition. A more detailed description is included in the Image Gallery linked above'

My very first bicycle Geohash was reached after a 12km-bike trip. It was located in the middle of a dusty field, right under a power line and right above a gas pipe (as a nearby sign indicated). I reached it at about 16:15, after trying to located the exact location for a while, as my GPs kept sending me back and forth. At the Hashpoint, I sat on a towel I brought, read and waited for Fluxkompensator to arrive. Just as on our previous meetup, I was already leaving, when I met him and a friend, a few hundred meters from the Hashpoint. We visited the Hashpoint again, together and looked up two nearby Geocaches, one was the first part of a multicache, which Fluxkompensator's friend will continue later, the other one in some sort of water-barrier. Then we cycled home, I arrived at my place at about 19:50.