Today's Hashpoint is located about one kilometer south of Berg, a small village near the French-German border. The hashpoint itself is actually in France, 200 meters from the border, the nearest town in the same country is Lauterbourg, but Berg seems to be closer. The point might very well be near the most eastern point in France, except Corsica (no source on this, just a short check in Google Maps) 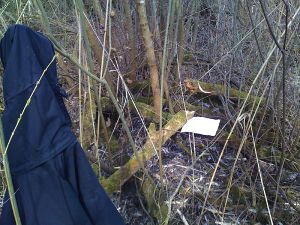 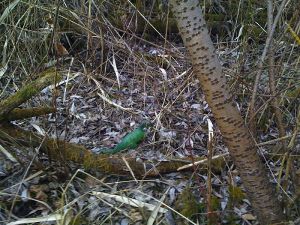 Similar approach as on my expedition to Neuburg, depart at Karlsruhe Kronenplatz at 14:37, S5 to Wörth or at 14:51, S4 to Hauptbahnhof, then the 15:07 Regionalexpress to Wörth, then at 15:19 Regionalbahn to Lauterbourg, arrives in Berg at 15:31.

With Fluxkompensator's announcement, I decided to take a train one hour earlier (even though he probably won't be able to read this anymore).

Left Karlsruhe at 13:37, took the S5 to Wörth, then the Regionalbahn to Berg. After a minor detour due to me chosing a wrong path and fighting through dense undergrowth, I arrived at the Hashpoint at about 15:15. Since I found no signs of Fluxkompensator already been there, I left him a note and rested near the Hash until about 16:00. Just when I was about to leave, I saw him and his daughter in the bike trailer in the distance, After visiting the Hash again, we looked up a nearby Geocache and also found this, whatever it is. At about 16:55, we split up and, since I just missed my train in Berg, I decided to walk the 4.5km to Lauterbourg. From there, I went back to Karlsruhe, where I arrived at about 18:45.

I will try to reach the geohash by bike from Karlsruhe, taking the ferry Neuburgweier/Neuburg. Probably I will be there a bit earlier than Koepfel, because I want to back before 5pm. Maybe we meet anyway if I'm late :-).