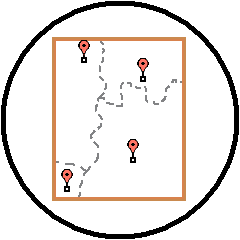 Use this template to put a ribbon like this on your own page.

You are free to increase the difficulty of the reverse regional achievement by aiming for smaller administrative divisions, e.g., in a graticule spanning two countries, you can go for hashpoints in both countries to get the most basic reverse regional achievement possible, but you could also try to reach coordinates in all respective subdivisions of both countries (states/provinces, then counties to make it even more difficult, etc.).

The graticule should span at least two regions, else it's just too easy.

Alternate meetup locations do not count for this achievement.

The following Geohashers have won this award, and have supplied proof.

Retrieved from "https://geohashing.site/index.php?title=Reverse_regional_achievement&oldid=839282"
Category:
This page was last edited on 17 May 2022, at 20:28.
Privacy policy
About Geohashing
Disclaimers