Today's hashpoint is located in a field in the Rheinland-Pfalz village of Niederschlettenbach. Next station is Bundenthal-Rumbach, which however is only served on Sundays. The next regular-served station is Wissembourg. 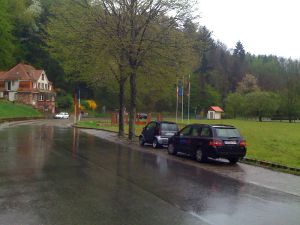 The French-German border. It was raining. 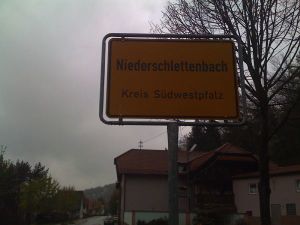 Entering the Hash Village while it was raining. 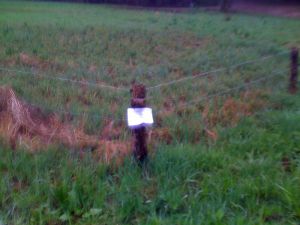 Coordinates reached. Did I mention, it was raining? ;) 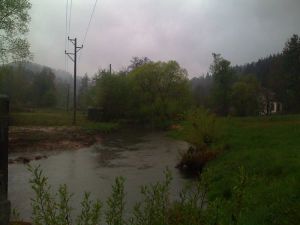 I will take the train to WIssembourg and then bike about 14 kilometers to Niederschlettenbach.

Update at 06:39, 18 April 2009 (UTC): As I woke up this morning, I heard the sound of raindrops falling on my window. Looks like this is going to be a Drowned Rat Geohash.

I left my home at 9:00. Being the lazy Geohasher that I am, I took the tram to the Main Station, where I boarded the Regionalbahn to Winden. In Winden, I entered a modern French local train to Wissembourg, And now, the fun begins: As you might have heard, it was raining. My clothing was soaked after not even a third of the ride. The Hashpoint was in a very muddy meadow, it might have been a nice area, but with the pouring rain, I decided to get back to the dry station building in Wissembourg as soon as possible. In Wissembourg, I discovered a road called road of walking and a machine selling DNA.

After my clothes dried a bit in the train back home, I decied to do the second expedition right away, without going home first. Part 2 >

(in fact, I crossed it two times each on the way there and back. Both my home and the Hashpoint are in Germany. The nearest train station was in France, though.