Today's hashpoint is located in a field west of Insheim, a village in Rheinland-Pfalz, population 2154. Insheim has a train station and it can be reached from Neustadt or Karlsruhe via Regionalbahn. 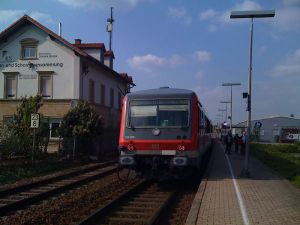 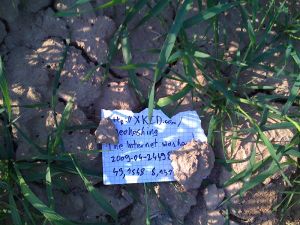 I saw Fivetonsofflax adding this expedition to the Mannheim Graticule page yesterday. After a short discussion on his talk page, I looked up some trains, in hope we would meet.

After just missing the earlier train, I took the 15:57 S5 from Karlsruhe Kronenplatz to its western terminus Wörth Badepark, where I arrived at 16:34. Then I had plenty of time to walk back one station to Wörth Mozartstraße, as it's called by the DB, or Wörth Badallee, as the Karlsruhe Stadtbahn operator AVG names it, apparently, they couldn't agree on one name. At 16:55, I took the train to Insheim, where I arrived at 17:18. Now to find Fivetonsofflax and Euterkuh. Unfortunately, we missed each other by a couple of minutes, as they were heading back on the main street, while I took a smaller side road. At the end of the Bahnhofsstraße (station street), I turned left, went via the Halbgartenstraße (Half-Garden-Street) and the Kattelerstraße. As I arrived at the Hashpoint, they were probably at the Main Road looking for me. Well, we'll meet another time. At 18:43, I took the Regionalbahn back to Karlsruhe.

As Koepfel already mentioned, the intention was to meet each other at the hashpoint. Since the location seemed to be easily accessible, all we had to do was looking up a train connection. The only problem was that we didn't know exactly when we could start.

We met at Heidelberg main station and went to Insheim via Neustadt an der Weinstraße and Winden. Apparently, we scared the old lady sitting opposite to us. At least, she switched to another place as soon as it was free without any obvious reason. Maybe she thought we were planning a terrorist attack when we used such words as "coordinates".

In Insheim, we could pretty much follow the main street until we were about 500 meters away from the hashpoint. Field paths brought us to a distance of 20 meters. The hashpoint itself was located on a field with plants that looked exactly like grass, but they were arranged in neat lines. Anyway, we tried not to do any damage when we got to the actual coordinates.

By then, it was about 5:10 pm. We figured that Koepfel would be arriving now if he had arrived at Insheim's station at 4:43, so we guessed he would have had to use the next train connection and arrive at 5:18. As we weren't sure whether he would come at all, we then decided to get back to the main street and just look out for someone with a GPS device. Unfortunately, we either missed each other or Koepfel was using a different way to get to the hash.

On the train ride back, a funny pug drooled on Euterkuh.