In an agricultural field, right on the edge of a farm access road according to google maps. It appeared very likely that we could get within GPS accuracy without actually going into the cultivated area.

Robyn and Rhonda came here after camping overnight at another geohash.

With our bicycles reloaded, we set out south, aiming to pass around the other end of the ridge that we had avoided on the way here. The rain had left no evidence of our chalk marks at yesterday's geohash, but the Internet had moved on, and yesterday's point was no longer of any interest to anyone.

We turned right onto Washington route 542 and followed it for about 27 kilometres, through Maple Falls, Kendall, and Deming (where we ate a snack at a picnic table in front of the public library). A few more rights and lefts and ups and down brought us to Aldrich Road, which should take us within four hundred metres from the geohash. 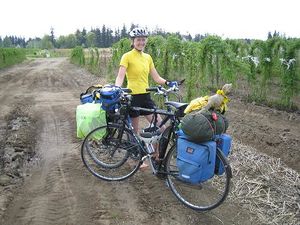 Rhonda and our bikes at the geohash

We cruised along this mostly flat, very straight rural road, riding side by side and taking up the entire lane except for a couple of times when a car was coming. We were looking for Piper Rd., which was right across from the buildings nearest the field, which we thought might be the owners.

At Piper Rd. we turned into the driveway of the house, right beside the field's access road. Robyn walked around to the back door to knock, since the front door was behind a fence and some tall weeds. A cat that moved so little Robyn thought it was a statue at first watched us, and some dogs barked at us from somewhere inside. Robyn noticed that the "town truck" didn't seem to be there, and probably nobody was home.

We conferred briefly and decided that since the access road wasn't gated, and we were pretty sure we wouldn't have to leave it based on the google maps image, we would go down the access road and get as close as possible to the hash point.

We pushed our bikes along the road since there were large, mud-filled potholes and the road surface was packed dirt - eminently suitable for a tractor's wide tires, but not quite so good for bicycles.

To the corner of the field, around the corner onto another access road, and we counted down the last few metres. And there it was, right on the edge of the access road, right beside some bundled up raspberry vines.

Both of us admired the cleverness of bundling up the raspberry plants in this way, being more accustomed to picking raspberries from the impenetrable tangles that they normally formed. Robyn had assumed she was in a vineyard right up to the point that Rhonda pointed out that the plants had raspberry leaves.

Our photos and proof collected, we opted to not leave a marker and went back to the road the same way we came in, then continued riding northward, now heading for Canada.

We chose to ride north on Old Guide Road. From its name and its position parallel to Guide Meridian Road, we knew it went in the same direction, but it was definitely quieter than Guide Meridian, which is a highway. I expect geohashers to wonder which meridian, and what was it guiding? I did. The old one appeared to follow the 122 degree 30 minute meridian, and what it was guiding, other than us to the border, I have no idea.

We were actually quite close to the Canadian border, having passed a Mile 3 marker before turning off Guide Meridian Road, but we were also pretty hungry and decided to lunch at the first convenient spot. We rode by a fenced field where the fence was set back about ten metres from the ditch, and the area between the fence and the ditch was mowed, well-kept grass. The owners of the field were nearby, having a birthday party in a big barn behind their house and easily acquiesced to our request for picnic space.

The remaining food in our luggage was nuts, bananas and a big brick of cheese. Robyn got out the cheese and sliced off a chunk. Mmm! Good cheese! It was medium cheddar, from Tillamook, Oregon. Rhonda sliced some more. We ate the rest of the bananas, some nuts and whoa, we ate all the cheese, effortlessly. Hungry hungry cyclists. Making sure we had left no scraps of garbage behind, we got back on the bikes and rode to the end of Old Guide Road.

We then had to cut over to the highway, which wasn't as pleasant, especially as there was construction going on, giving us a poor shoulder (and really crazy pavement lines) in places. And the mile markers were now up to eleven. Huh? We reverified that we were going north. The mile markers apparently didn't consider Canada to be the centre of their universe. After a while we intersected the route Robyn had cycled on previous Bellingham geohashes, choosing not to do a Badger Dance as we crossed Badger Road, but smiling at H Street Road and finally riding up alongside the traffic queued northbound at the Huntingdon border crossing.

Of all the land crossings from the Pacific ocean to the first range mountains, this one seem to be the most irritating. The traffic bottlenecks into the crossing area, such that it is hard to get by on a bike. The traffic was backed up too far to just merge across lanes. Robyn knew from previous experience that you get yelled at if you don't use the crosswalk to get from the right hand side of the road, where we ride, to the left hand side where the customs office is. But the crosswalk is after the first row of booths where the customs officers sit. So instead we got yelled at to report to customs. We leaned our loaded steeds against some pylons outside the pedestrian entrance. (There was a sign asking cyclists to leave bikes outside). Robyn took a couple of pictures of them there, but a customs official came up and told her that she couldn't take pictures there because of the car licence plates. No, that prohibition didn't make sense to Robyn either, but she obligingly deleted the photos, and we went inside with our passports.

We passed the usual questions about how long we'd been away and what we were bringing back. (Damn! we forgot to declare the three leftover marshmallows!) Then they asked "are you carrying anything on your bicycles for anyone else?" Of course we weren't, but we both had to turn and look out the window at the bicycles while we processed the rest of the question. Then the official pointed out the bike racks. He must have seen us having some trouble getting the bikes to stay in place against the pylons. The "bike racks" provided are low chunks of concrete with wheel-bending slots cut in them and no lateral support for bikes. We explained that they were inappropriate for heavily loaded bicycles such as ours, and fortunately for our case another official chimed in beside our interrogator with "it bends the frame," so our suspicious activities were accepted. We crossed back across the crosswalk and welcomed ourselves back to Canada, our civil servants having forgotten that nicety.

Now just thirty-two blocks remained before the bus stop. Robyn was considering riding if not all the way home, at least back to Surrey, to make it to over 200 km for the weekend, and to avoid having to pull all the bags off the bike to put it on a bus. Rhonda had described the bike and baggage loading procedure at King George station to be quite an ordeal. Robyn decided that if there was space for two bikes on the bus (buses can carry two bicycles max), she would probably go on it. It was still 58 km all together to home and the Skytrain would only take 15 km off that.

Halfway from the border to the bus we reached 16th Avenue, and the very corner where Robyn had picked the dandelions for T-Rex. The light was red. As we stopped, Robyn removed the garland from T-Rex and flung it back where she had picked them, possibly setting the all-time record for round-trip bicycle travel by dandelion flowers.

The light turned green and we reached the bus stop just as the opposite direction bus was pulling up. This is almost the end of the line for this bus route, so we knew it would be turning around shortly. There was, however, one bike already at the bus stop. No rider, just the bike, sans owner, locked to the bus stop. Acting on the assumption that the bike belonged to a commuter who would arrive by bus and ride home on the bike, rather than someone who had gone for a quick snack, leaving his bike in the queue for the bus, we prepared our bikes for loading. When the bus pulled up we were still the only ones at the stop. Robyn loaded the bikes and Rhonda the luggage and we were all secure and aboard in no time. We rode right to the end of the line at Surrey Central station so the driver didn't have to wait for us to unload at King George station.

And from there it was SkyTrain (plus SeaBus for Rhonda) and a short ride home each. Robyn ate 250 grams of chocolate and then supper. Total distance ridden for the weekend was 180.73 km during nine hours and fifty minutes of rolling time. That of course counts time when she was walking pushing the bike as well as riding, but doesn't count breaks when the bike was not moving. And she is still trying to get the pine sap off the bottoms of her feet.

Rhonda ended up chatting on the seabus with another cyclist with a backpack and no cargo racks at all, who was asking about the impressive luggage-carrying abilities of her bike. He seemed interested in geohashing after the concept was explained, so the URL was duly typed into his iPhone and Rhonda promised that this expedition report would probably be completed and on the website in a day or two.