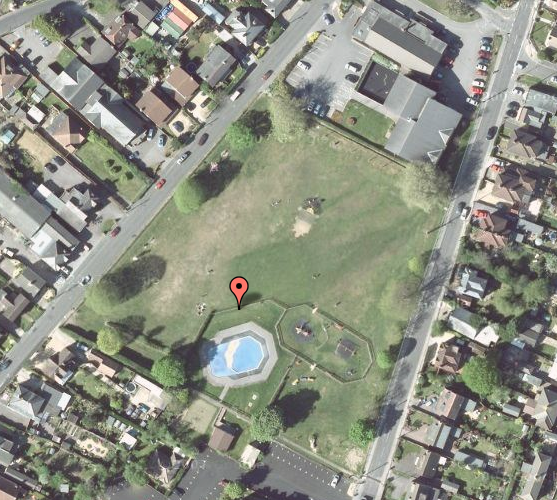 Bluestar 3 bus goes from Southampton to Hedge End £5.30 return or from Bitterne £4.00 return.

I left home at 13:50, went to get the train from Winchester to Hedge End at 14:08, walked the 1.9 miles to the recreation ground, stopping to take photos, and going the wrong way only twice. I got to the recreation ground at about 15:40, poked my real-life google pin in the ground and then proceeded to feel rather embarrassed as everyone was there with children in the paddling pool, and i had no children! I was very relieved when Mike showed up!

We played music together, solved the Rubik's cube, juggled, took photos, and talked about our interests and our life experiences. It was so nice to get to know Mike, somebody i wouldn't have otherwise met, and we found we share some similar interests. We attracted a little attention from some nearby people, and we explained a little about xkcd and geohashing!

My friend Laura turned up at around 17:00, not even knowing why we were there or what geohashing was all about! I'd just said i'd be in Hedge End recreation ground and wasn't even expecting Laura to come! We all had a good time chatting and enjoying the weather together. In my opinion it was a most excellent geohashing adventure!

I was hoping to cycle to this geohash (my very first one!) but I thought the weather looked a bit iffy, so being a lazy git I drove there! Aimee was hard to miss, with her wonderful Google map pin - well done for making that so quickly.

It was probably an unusual type of meet-up, being in a pleasant public place and there being just the two of us (until Laura arrived), but it was terrific fun, and I enjoyed meeting Aimee and seeing her play the xaphoon, an instrument I'd not seen before. She can juggle, which is something I seem doomed to fail at, though I think I had the edge on the Rubik's cube. I'm only a beginner on the flute (I usually play keyboards) but managed to pick out a simple harmony while we played the xkcd song. Believe it or not, I had not heard it before!

I suppose doing the public place thing has a lot of advantages, including the "public outreach" aspect, as in "Hey everyone, look, the Internet is here!" However, next time I'm hoping for a slightly more adventurous journey - this was literally less than 2 miles from where I live. Looking forward to it regardless, though!

How the location is calculated 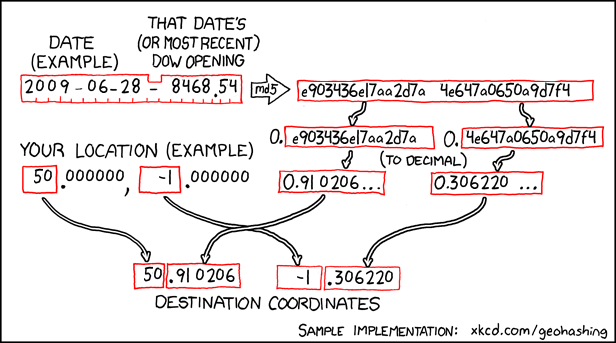 It's a combination of the date, the Dow Jones stock market data, an encryption algorithm, and a translation to geographic coordinates. We use 50, -1 to find the closest Geohash location to us, and look it up on a Google map to see where it falls. Quite often it's in the English Channel, or a field in the middle of nowhere. When it falls in a convenient place, such as Hedge End recreation ground, it's quite fun to go there to see if anyone else has come to the same place for the same reason!