Near a road in the beautiful East Hampshire countryside between Hambledon and Clanfield. A longish boundary hit away from the historic Hambledon cricket ground! 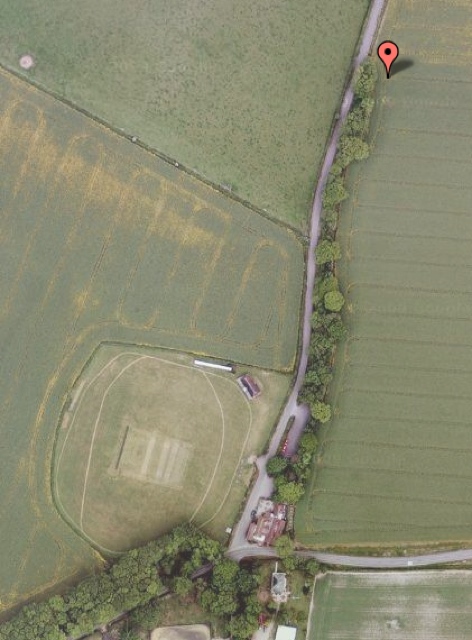 I plan to drive from Southampton to somewhere near the hash, then walk or cycle the rest of the way. If anyone can reach a point somewhere roughly along that route and wants a lift, let me know. --macronencer 20:23, 17 July 2009 (UTC)

Just spotted that this hash is just around the corner from The Bat and Ball, a historic pub for cricket fans. I think I will make a minor adjustment to my route now :) --macronencer 10:19, 18 July 2009 (UTC)

Macronencer's report: THE MASTERS OF CRICKET

This being only my second hash, and the first one being so easy that it was almost a couch potato achievement by comparison, I was determined to make the effort to go. As it turned out, I would be going solo, but it was an adventure, and that, as they say, is the thing.

14:20 reached Hambledon, a beautiful village in Hampshire, known as the cradle of cricket. Little did I know how close I would come to that history. I was trying a new iPhone app called Motion-X, and as soon as I parked the car I jumped out and began to get a satellite fix. Well, that was the plan. In the end, after about 10 minutes of pacing up and down the high street positioning myself so that there were no big stone buildings nearby and ducking down side streets to the bemusement of the locals, I decided that I knew the way anyway, and set off.

It was easy going at first as the verges were well-tended and wide, with only the occasional ancient Bourgeois ha-ha to entrap an unwary boot. Gradually, the amount of refuge space from traffic grew smaller and smaller, and the traffic itself grew busier. I think I will probably drive most of the way, next time I get a hash like this. It wasn't the safest journey in the world, being 3 miles of mainly walking, interspersed with leaping into the nettles in fear of my mortal soul.

Eventually I crested a particularly pedestrian-unfriendly hill and was relieved to see the junction where I needed to turn left. As I approached, I heard a familiar crack of leather on willow, and realised that I had stumbled upon the Hambledon cricket ground, no less, with a game in progress! Cricket fans will know all about this place, and in fact there is a monument in the grounds to show how important it is (see photos).

Opposite the green was the Bat and Ball pub. This confused me a little, because I had entered a waypoint for this, based on Google Maps, and it should have been about half a mile further on, beyond the hash point. I thought it unlikely there were two, but resolved to check anyway, later on.

15:25 After a short walk down the hill, the GPS needle swung to the right, and there it was! Just behind a gate, in a field of Barley. I jumped over the gate and did some triangulation: it seemed to be about 20m away, in the middle of the crop. Nobody could see me but I didn't like the idea of damaging the plants, to I decided that 20m was close enough. As it was still early, I continued down the road to find the potential twin of the pub I'd seen. I strongly suspected that Google was wrong, but I fancied a little more walking. I was glad I did this, as I stumbled across a field of pigs, which for some reason always makes me feel good. I like pigs.

As I got closer to the second waypoint, I became more and more convinced that Google was wrong. A final well-clipped hedge and friendly gate confirmed it. No pub, just houses! I turned back.

15:50 On the way back to the hash, there was a brief, light shower so I stopped under some trees and ate some lembas bread. Or perhaps it was a samosa. Not sure, but it was definitely triangular. Then I nipped over a stile onto a public footpath to collect loads of chalky white stones. Returning to the hash point, I left an XKCD sign. I waited for a while in case anyone else showed up, but the rain started again so at 16:07 I decided to call it a day, and nipped back up the hill to the Bat and Ball, where I had a very pleasant pint of London Pride to rest my weary bones - and earned an honourable mention in the Pub Geohash achievement. The pub would actually have been visible from the co-ordinates, were it not for the trees! Plenty of cricket memorabilia everywhere in the pub, though ironically the landlord and scant few patrons there present had their eyes fixed to the golf on the TV :)

16:30 Left the pub to brave the traffic again, and suffered very minor showers occasionally, but overall nice weather and a pleasant variety of countryside scenes (see photos - especially if you are a botanist or zoologist, as I have some questions).

17:15 Reached the car just as the rain got heavier. Perfect timing, and I would say a good end to a very pleasant solo hash.

Addendum: My dad has just seen the photos, and informs me that the purple flowers are Rosebay Willowherb - also known as Fireweed, because it always used to grow on bomb sites. Thanks dad! --macronencer 20:36, 18 July 2009 (UTC)