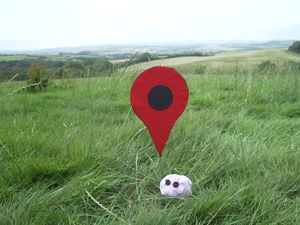 Successfully found the geohash, and what a view!

In a field near Bierley, Isle of Wight.

Macronencer plans to take the ferry from Southampton (obviously) but is not yet sure whether to cycle down to the hash or take a bus. Probably he will cycle, as he is still too fat and needs shrinking :|

Sermoa and David will take the train from Winchester to Southampton, the ferry from Southampton to West Cowes, the Number 1 Southern Vectis bus to Newport where we will probably stop for some lunch. Then we take the Number 6 bus towards Ventnor, getting off at Niton or Whitwell. We will probably have time to look around a bit. I want to get some geohashing postcards to send to people! The meetup will be at 4pm. We'll probably try to take some food in the hope of having a geohash picnic! Later on we might go to Blackgang Chine ... i particularly want to see the hedge maze there.

Note to others: you can pre-book train and ferry together from thetrainline.com. It was £12.10 from winchester, with a network railcard, £18.30 without.

We met at Winchester train station at a few minutes to 11, picked up our prepaid tickets and boarded a (very crowded) train to southampton. From there we took the (even more crowded) (look, the bus is full, wouldn't it be a good idea to go now?!) free bus to the docks and soon we were on the ferry to the isle of wight! 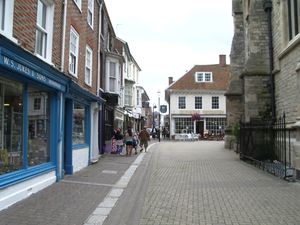 Having got over the shock of a day-rover bus ticket being £10 each, we were on our way down to Newport where we stopped for some lunch and a look around. Newport is the isle of wight's biggest town, which is not saying much at all. But it felt so exciting: because we had got there on a ferry it totally felt like we were in a completely different place. I caught myself marvelling that David's phone still worked - 'abroad' lol! We ate lunch at OGGIES chip shop. I bought some postcards. 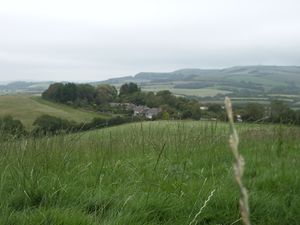 The most amazing view i've ever seen from a hashpoint!

Having exhausted almost everything that Newport has to offer, we took another bus down to the south of the island. This is where you see the very best views. It's all hills, fields, sheep, sky and sea. Just beautiful. We were looking out for Mike every time we passed a cyclist, heheh!

We came to Niton and got off the bus. We visited a little shop to get some picnic components and walked about half an hour up the road, stopping occasionally to take photos of the scenery and other random things. We arrived at the geohash field at about 15:45, just minutes after Mike had arrived from the other direction. We whooped with glee at the ease of access into the field and eagerly clambered over the stile (with mike's bike!) and followed the gps to the exact location. Whereupon we got straight to business planting the google pin, taking photos and videos, having a picnic, playing a card game, doing cartwheels, making music on the iphone and, most especially, marvelling at the phenomenal view from the hashpoint.

In summary: the Dow Jones was most excellently kind to us today! What a fantastic day!

You can find a report of the geohashing experience on david's blog.

This will be very brief, as I've spent far too long getting the photos sorted!

My journey involved an early start. I left home at about 7:15 and parked in Woolston, then cycled over the Itchen Bridge and thence to the ferry terminal. The crossing was slightly delayed by a cargo ship, but otherwise uneventful.

Arriving in East Cowes, I made my way towards Ryde. I had chosen as sort of roundabout route, in an attempt to avoid Newport. This was because someone at work had told me that the hilliest and least pleasant roads were in that place. It turned that it wasn't that bad, so I could have saved some distance by using the North-South route for both legs of the journey. On the other hand, I would not have seen so much of this beautiful island.

Got a bit lost near Ryde when a signpost lacked information (this seems to be a common problem here) - fortunately, three cyclists I'd met on the ferry turned up at that moment and one of them kindly let me consult her ordnance survey map.

I had planned to go to Bembridge for lunch but I wasn't too confident in my endurance so I went straight to Brading. Had a quick look around and a nice lunch in the Caroussel Café before heading off again towards Shanklin and Godshill. The skies were pretty ominous at this point, though the total precipitation all day ended up almost nil, and in fact I nearly got sunburn despite the cloud cover, simply from being in the outdoor environment for so long (about 4 hours of cycling, and several more walking about).

Godshill is wonderful and justifiably a popular tourist spot. The model village was very cool, and the church is also worth a visit. It has a picture of Jesus that has closed eyes up close, but open eyes that follow you around from a small distance away.

A very nice ride through sleepy hills and back roads followed, bringing me to the hash location shortly before 4pm. A few minutes later, Sermoa and David turned up. Mercifully, despite my previous worries at seeing fields with crops in them, the hash point was in a field at the edge of downland where it is common for families to go walking. One such family turned up before the other geohashers, and I asked whether they were from the Internet. Obviously not, though they didn't seem to mind the question!

The hash point was at the top of a slope, with a handy wind-break of trees behind. Absolutely the most perfect location. All it lacked was a pub across the road :)

After picnicking on Brioche (thanks Sermoa!), playing cards and generally having a meetup kind of time, we packed up and left. I wanted to make sure I could make it back to the ferry by darkness. Cycling through Newport to Cowes (I decided to go to West Cowes and try the chain ferry) was pleasant, but I was quite tired by this point.

The chain ferry was frequent and reliable. I crossed over at about 1850 and was about to ask in the ferry terminal whether I could get the earlier ferry at 1930 when I remembered that ferry food is not cheap. So I had a look around and couldn't find any good places to eat. I rang Sermoa and she and David were about to get the foot passenger ferry (which leaves from West Cowes). So I took the chain ferry back again and we all met up to find food... which ultimately didn't work out, so we said goodbye and I returned on the chain ferry a third time :)

There was a nice sky on the way back. I also had the opportunity to point out an interesting object to a mother and son who were looking at the Southampton shore. This object is a modern equivalent of "leading lights". It's on the beach at Hamble, and I look for it whenever I go past on a ferry - especially in the dark. It is intended to help a boat approach in the right direction, finding the best channel. When you are approaching correctly it shows vertical bars of black and orange. If you veer to one side, these turn into an arrow (chevrons) showing you which way to turn. I was so intrigued by this that one day I went to the beach where it is positioned and had a look at how it works. It's very clever! I don't think I have any photos, but I will have to go back and get some, then I might post them here.

Phew! OK, longer report than expected. I'm glad really - after such an amazing day I didn't want to short-change anyone. My thanks to Sermoa and David for being there and making this an incredible meetup! It certainly gave me some exercise: 65 km of cycling, with a total vertical up component of over 800m. This hobby will get me into shape pretty soon :)