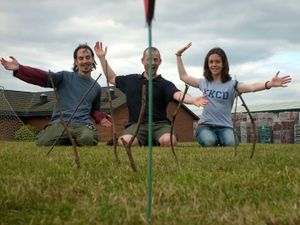 Very close to Hilsea train station in Portsmouth. Looks like a field of a recreation centre.

This is an easily accessible geohash in a public place, ideal for a first-time geohash! (hint, hint!)

It's not immediately obvious, but after studying the satellite view for a while, i have determined that this is probably the easiest route to take from the train station to the geohash. 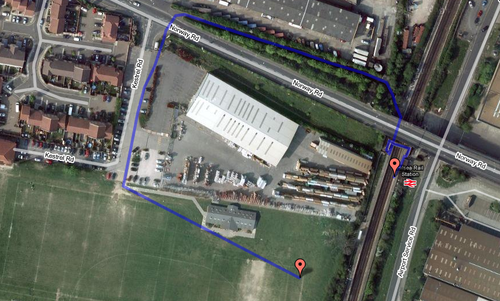 Walking route from Hilsea train station to the geohash.

Sermoa will take the train and be at the geohash for 4pm, with my google pin in the ground and wearing an xkcd tshirt. I'll bring food, drink, playing cards, juggling balls, astrojax (if i can find them!), ukelele and xaphoon. I will tweet my progress by text on the hashtag #geohashingN50W1 and i encourage others to do the same. I've never stopped in Hilsea before so i'm quite looking forward to having a little look around either before or after the geohash.

Can anyone think of a good way to leave a non-permanent marker of the event? carefully arranged sticks might work ...

Macronencer I'll be arriving between 3pm and 4pm by train. I'm bringing supplies to try an idea for an unusual marker - let's hope the ground is soft!

Maoi-taoi I live in Southsea so i'm going to leave at about 3pm and walk up there. Not sure how long it will take but i'm aiming to get there about 4pm. This is my first geohash (i wanted to do it a couple of months ago but it was an unlucky day and i didn't feel like swimming the channel), i'm looking forward to it =P

I was not sure I'd be making it to this one, but I'm certainly glad I did! Before I left, I gathered sticks from the waste ground behind my house: trying to find curved ones was not easy, but I finally managed three that were slightly curved. I had the "viewable from just one point" idea back near the start of my geohashing in June, and it had been on my long-term goals list since then. When it became clear that neither chalk, ants, pebbles nor paper were really suitable, I had decided that this was the day for the stunt.

Bursledon station is a five-minute walk from my place, so this really was a Public Transport hash for me! The train only took 25 minutes and there were no changes. It was fun to look at things along the route because it was my first time on that track and I was passing lots of places I had already been to, for example the section of the M27 motorway that I sometimes use to get home from work, and also a riverside walk/cycle route that I like to travel.

I now realise that I remembered Sermoa's route incorrectly and I actually walked over the road bridge instead of going under it - but never mind! As I went over the bridge, I noticed that lots of games of soccer and rugby were taking place, and I was a bit worried that we wouldn't get access without a grilling! However, everyone had gone home by about 20 minutes later, so everything turned out OK. Sermoa turned up shortly with a picnic, and we set about finding the point, placing the Google pin and doing the usual hashscot photos.

After we finished shooting some video for my 2009 montage, we noticed Maoi-taoi's approach, and he hailed us, asking whether we were geohashing. It must have been obvious really, due to the Google pin! It was so cool that he brought his fire staff along - it really made for an atmosphere. Sadly, I missed the audience session later on as I took an early train home.

The marker tactics worked rather well, though some deeper curves on the bendy twigs would have improved matters a bit. I was pleased with the results, anyway.

On my way back on the train, I heard a bloke say to his wife, "hey, what's this doing here?" He had found a 1980 edition of The Beano on the train!! It looked in pretty good condition too. Either it fell through a time warp, or it must have been left by accident - but who would be casually reading such an old comic, so as to lose it? It puzzled me. We may never know!

Anyway, it just remains for me to thank Sermoa and Maoi-taoi for making this another successful and fun meetup. I have now seen so much variety in my expeditions, I honestly don't know what to expect next! A water hash in a borrowed boat? Somewhere in a famous public building? Who knows? And that's the fun of it.

I took the train from Winchester to Hilsea, and photographed a very obliging train driver! :) I found my way easily to the hash point, taking a little time to explore and do a little shopping at the Lidl until i got a text message to say that Mike had arrived. 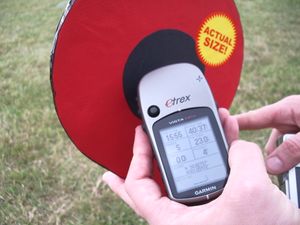 I tried to guess the hash point using my memory of the satellite image, and i was about 2 metres away. Mike did the gps dance twice from different directions to confirm the point. We had only just started doing our photos when all of a sudden Maoi-taoi showed up, to our surprise because we didn't know anyone else would be coming! I wondered whether Matt was coming to ask what we were doing, and then i saw the fire staff in Matt's bag and thought to myself, "Aha! You look like a geohasher!" and indeed Matt came and asked us, "Are you geohashing?!" - we were completely delighted that somebody other than us was there - by intention! 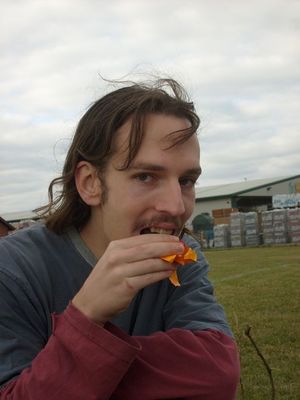 there must be cake!

We had a very fun time together. Mike brought sticks which were placed in the ground so that from a particular angle they would spell XKCD. Matt did staff spinning, i did juggling. We all ate cake and chocolate and drank orange juice. There ain't no party like a geohashing picnic party!

After Mike left, Matt and i discussed the unfortunate ruin of Derren Brown's career this week and chuckled over the amusing lyrics of The Derren Brown Lottery Song by Whouk. I could have played it on my ukelele but i didn't want to. 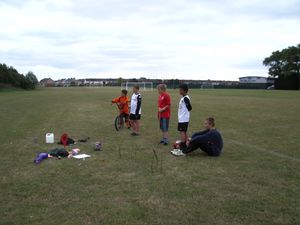 Later on Matt did some more staff spinning, but this time with fire! Which was sufficient to attract a few kids over to see what was going on! We put on a little circus performance for them, they asked us some questions, we showed them how the sticks spell out XKCD, and briefly explained geohashing to them! It was nice to have some public interest. I gave one of them the sheet with the geohashing algorithm for today's location and suggested they show it to their geography teacher at school! They had a bit of food and drink with us and then went back to their football game. We didn't stay much later after that; we rearranged the sticks so they weren't sticking out of the ground anymore, and went on our way feeling happy after a very successful geohash!

Links to videos on youtube that we have made from this geohash: