It seems to be up a hill, going by this bing birds eye view: 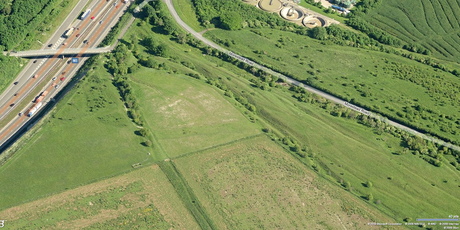 Location of the geohash, from bing birds eye view

Some trivia for you: here is the geohash location from over 50 years ago when there was no M3! When they built it, they cut straight through Twyford Down, separating the geohash from St Catherine's Hill. This angered a lot of people. I very vaguely remember the road layout from before the M3 so it's interesting for me to see this. 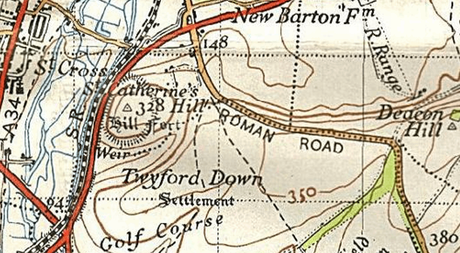 With great thanks to ooc.openstreetmap.org

Oh yes! I remember very clearly sitting every morning in the "Hockley Lights" traffic jam that used to happen before the new road. It was a total nightmare getting to work. I do like the countryside too, so I had very mixed feelings about the Twyford Down cutting, but I suppose to be fair they did at least turn the old road route into a nature reserve where it is now very popular to go walking. You can still see an old railway viaduct there, I believe: this used to be directly on my left as I was approaching (at snail's pace!) the traffic lights at Hockley. In those days (early 1990s), the M3 did exist, but began further North: there was a gap around Winchester, meaning that the Southampton roads were only linked to Surrey via this awful traffic hotspot. Actually, I'm old enough to remember when the M27 was incomplete - I was at university when they finished it. See here if interested. --macronencer 08:01, 24 October 2009 (UTC)

Looks like a work colleague is going to drive there with me at lunch time! Let's hope the nice weather holds out :) 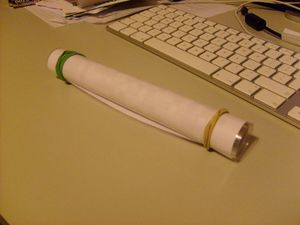 This was a bit of a last-minute prank really! I knew Sermoa was planning to go to the location the next day, but I thought I'd be too busy to make it. It did occur to me to suggest a midnight hash, but the weather really didn't look that great. However, around 10pm it started to clear a bit, and it occurred to me that I had yet to see any Orionid meteors. I suddenly realised that it would be quite a laugh to leave a marker for Sermoa to find the next day, get a midnight geohash and maybe see some meteors too. So I printed off a special marker in the form of a QR code and, chuckling happily, I laminated it, then rolled it into a tube and secured it with rubber bands. My intention was to stick it into some wet ground so that about 3 inches were showing, making it fairly inconspicuous except to a geohasher. As it turned out, it may have been a little TOO inconspicuous, though at time of writing I'm not sure what happened.

Anyway, here's a summary of the trip:

I located a suitable parking place opposite the sewage works, keyed it into the TomTom, loaded the hash point into the eTrex, put on my best mud boots and hit the road.

As I pulled into the parking area, I saw a light in the trees and noticed that several caravans were parked there. I had no idea who was in them, but whether it was the night watch for some local roadworks or a bunch of travellers, I didn't really fancy explaining myself. So I drove a little way up the road and parked on the other side, then walked back. I sneaked stealthily past the caravans just in case, but I probably could have worn a one-man-band outfit to be honest - the nearby motorway was so loud it would have drowned the noise anyway.

Reaching the bend in the lane, I nipped through a gate and continued along the bridleway up the side of the hill. It was a moonless night, and I occasionally needed the torch, though the light pollution from Winchester actually enabled me to see my footing most of the way.

At the top was another gate, with a track beyond, and a fenced-off (ploughed?) field to its left. The hash point was to my left, right on the hedge. I really hoped it was not in the field! 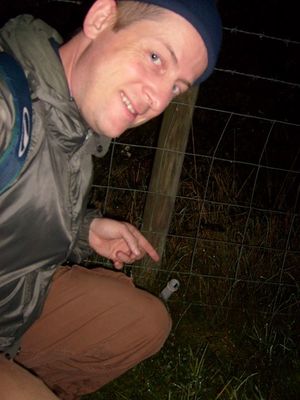 I crept along the field by the hedge, carefully watching the GPS. After a couple of passes, I decided that it was just the other side of the barbed wire - within the GPS accuracy, I think it was fair to say I could reach over and my hands would be on the hash point, so I counted that a win. it was 23:56 at this point, so I waited for midnight so I could get my proof of midnight co-ordinates. As I waited, a fantastic meteor lit up the sky! YES! This made the whole trip worthwhile, even if I hadn't already been enjoying myself. I really had begun to think that clouds would deprive me of a single Orionid this year.

Midnight came and I got my photo. I left the marker pushed into the grass behind the fence, so that it stuck out at an angle at the bottom of the fence post. I figured that muggles walking up and down the bridleway in daylight would not notice it, but that Sermoa would find it pretty quickly as she would be much closer. Fingers crossed!

I hung about for a while, then decided I should be off home to write my report. As I walked carefully down the bridle path, a nearby tree started making rapid creaking noises. It was probably the wind, or it might have been some creature doing it, but whatever it was it made me look up - to see a second meteor, as big as the first! Nice.

All in all, a rather successful covert operation. 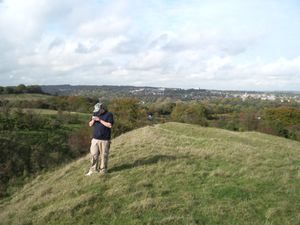 I managed to get Richard (a work colleague) to give me a lift to the location in our lunch break. We parked in a nearby siding and walked up the footpath, looking back to admire the amazing view. Pretty soon we realised we were the wrong side of a big chasm; we were going to go around it but then we just decided to run down it and up the other side!

The GPS on my phone was full of #fail today (accuracy really low) but we compared the shadows of trees from the google maps to estimate where we should be. I'm pretty sure we were in the right place. From the hash point we could see the whole of Winchester! It was lovely!

Only on the way down did i learn (from a phone call) that Macronencer had been up there at midnight and left a marker at the hash point. I feel really silly that we did not see it! If only i'd known i would have looked out for it! Either we were in the wrong place, or we didn't look very carefully, or somebody had already removed the marker. There was a farmer in the field the other side of the fence who might have already removed Mike's marker.

I can only hope that DavidMiller might be able to go later this afternoon and find both the markers and see if ours was actually in the right place.

This is the route that Richard and i took up and down the hill. We parked right next to the caravans which Macronencer mentioned. I gather from the reports that the other geohashers went round the other way. Where we doubled back is where we crossed The Chasm! 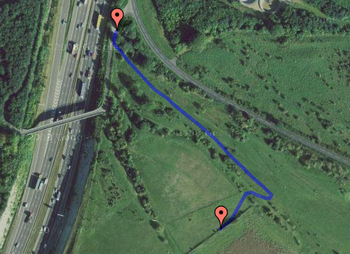 180° panorama of Winchester as seen from the geohash point 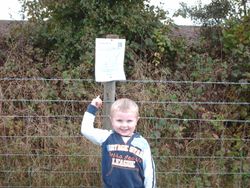 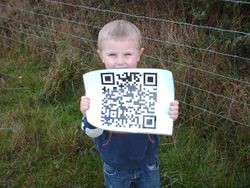 I met Kate after work, dropped off Chloé and brought Ryan along with me to the hash. We got onto the Winchester Park and Ride and got off at the St Catherine's car park where we swiftly headed for the hash point.

You can check out the picture in the gallery below to see my trip after dropping off Chloé.

There isn’t really much to say about the hash to be honest. It was pretty uneventful apart from finding two markers, left by Macronencer and Sermoa. We saw some sheep and rabbits around the area and saw the farmer who looked like he was being attacked by birds eating his seeds he was sowing.

Sermoa was so close to finding Macronencer's marker, I'm really surprised that she didn't see it, as it looked quite obvious ( after seeing hers ) as I walked closer to the hash point.

I took a few photos of the surrounding area and of myself and Ryan, which are below in the gallery.

These are not uploaded in any particular order.

Wow, what a fun day! Three separate expeditions, the second of which knew nothing about the first, and the third which saved the day by identifying both markers and documenting their position from each other!

The collaboration doesn't stop there either - thanks to Ryan holding up the marker, i was able to get a reading from the photograph of the QR code! 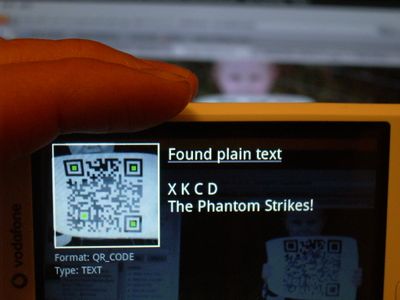 Reading the xkcd marker by the power of photography and the internet!