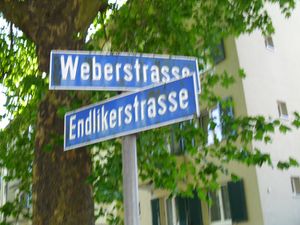 A back alley in Winterthur

Now that was an easy one. After having climbed to the summit of a mountain the day before, Calamus wasn't exactly impressed by the thought of walking about two minutes from a bus station.

Luckily enough for him, none of his co-workers had even bothered to show up at work due to heat, so getting away unnoticed was a lot easier than he had originally thought.

As almost the whole journey took place in a train from Zurich to Winterthur, and train rides are sometimes rumoured not to be the most exciting thing on earth, here's an interesting fact instead of a detailed description: The soothing, monotone, yet friendly female voice announcing the route has repeatedly and prominently starred in a recurring nightmare of Calamus. Its dialogue is usually along these lines: "The SBB train crew welcomes you aboard the Intercity to Berne, Geneva, Geneva Airport and wishes you a pleasant journey. The train will be deployed in 3 … 2 … 1. For your and our entertainment, we are pleased to present a little deadly neurotoxin. Goodbye."

As the hashpoint was very easy to identify on a map, Calamus decided to try and get there without wasting any batteries. Thanks to a slightly enhanced Google Maps printout, he succeeded in doing so, but as he wanted to be sure that this was the right spot, he used his GPS, which was still in his rucksack, to check. Which probably spoiled the Achievement.

He waited there until some time past 4pm for somebody else to show up. Apparently, though, nobody else had wanted to go Geohashing in this heat, no matter how easy the spot. Tant pis, Calamus thought, and went Geotrashing.

When he was done, he visited his favorite pub of Winterthur - which he had just defined two days before - for a beer and a toast. End of story.