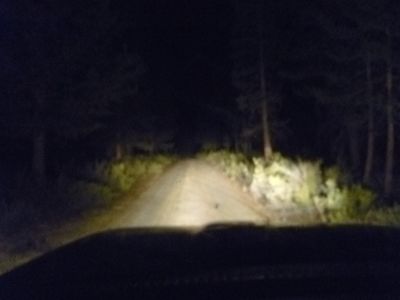 Driving into the forest at night.

Having been on five Expeditions over the course of the day, I checked into a motel in Bend. Driven by the restless demons of geohashing, though, I immediately set out again into the night, fortified myself with a few drive-by burritos, and drove south through the night for an hour or so.

This last hashpoint was off of long, remote State Highway 31, not a bustling route at any time and certainly not after dark. I took a turnoff into Deschutes National Forest land, and parked maybe 600 meters from the hashpoint.

It was sublime. The desert forest smelled thickly of sage and juniper in the cooling air, and the darkness and silence were absolute. The stars burned intensely overhead with that intensity that we city-people so seldom see. With the exception of a single truck passing on the highway, I was the only human for miles around. It was really great. And I was really glad that, after a recent geohashing nightfall misadventure, I had bought a flashlight for the truck. The only thing that would have made it better would have been closed-toe shoes.

Using the GPS, I hiked in to the hashpoint and more or less took pictures. It's kind of hard to get the real feel of the immense dome of the firmament hung brightwhite o'er the forest on a pocket camera, though. So I just stood there for awhile enjoying the uniqueness of the experience.

Then, I started back towards the truck. After a while, it occurred to me that in the dark, without reference to usual landmarks, it was possible that I shouldn't rely on my sense of direction. I checked my GPS. I was heading almost directly away from the truck. This happened two more times before I finally managed to complete the four or five minute walk.