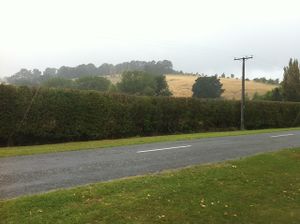 This is getting too much - another accessible geohash a few days after our last - we are getting on a roll!

This was on a grass verge beside a country road. Having looked on google maps after the event, it looks as if the point was about one metre closer to the road than I thought.

Being one metre further away from the road of course put me in the middle of a HAWTHORNE BUSH which was nastly prickly, but at this time of the year was very pretty, as it was full of red berries. And it did provide nice shelter to my geohash marker.

One of the family was home at school today, and I was late to start work, so we shot off late morning. Unfortunately, when we were half way there it started to rain.

I picked up a bit of 'trash', but my assistant refused to get out of the car (!) but she seemed to enjoy herself taking photos of me picking up rubbish in the rain.