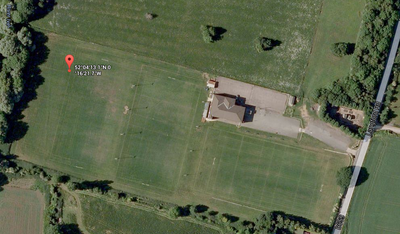 Macronencer is returning from a trip and hopes to do this one on his way through, to help him get another level on the Minesweeper Achievement. Any locals who want to come along are welcome! Please edit this page if you plan to come. I expect to be there early to mid afternoon.

I had a little technical issue (PEBCAK), leading to my arrival at the wrong location. I must make a note to remove old destinations from my Sat Nav favourites in future, so that I can't accidentally navigate to them…

An hour's drive finally brought me to the right place around 1530. Biggleswade Rugby Club has three pitches, and the hash point was next to the side of the farthest one from the entrance. I probably could have just walked down there unchallenged, but I had a fit of courtesy and phoned the president of the club for permission! After an initial bout of caution, he didn't seem all that bewildered at my request, and told me it was fine once he realised that I was just a nutter who wanted to stand on some of his grass, take photos and leave. Apparently they do sometimes get people exercising their dogs and so on, which makes for extra-tasty mud in the scrum. Yum.

Being a stickler for the rules, I have not added myself to the page for this achievement, since I had no proof! I suppose I could have recorded the conversation I had on the phone, but I don't really care, tbh.