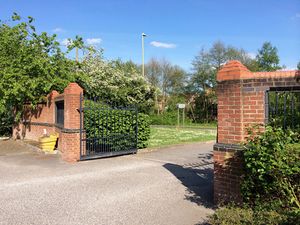 Macronencer is dashing through on his way to shoot a time lapse in Winchester, and plans to stop VERY briefly. A hash'n'dash!

Co-ordinates reached. This was a very quick one, since I had to get to Twyford Down to shoot some time lapse and I wanted to be in position well before sunset. The hash point was in Berry Business Village, just inside the main gate. As I was doing the GPS dance a security guy drove in, right past me. For some reason he didn't even bother to look at me strangely, even though I was actually in his way until I noticed his car and moved. Perhaps they get visits from The Internet regularly. The time lapse was a partial success, though some high cloud arrived and made everything a bit too hazy for perfection to be achieved - but it was a nice day anyway!