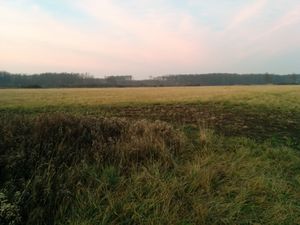 On the boundary of two fields on the Czech-slovakian border near the towns of Hodonin and Skalica.

It was late friday afternoon when Crankl messaged B2c that another globalhash had appeared near Vienna; an unbelievable circumstance as this was the second globalhash in this area in six months! After years of waiting they had by chance gained the opportunity to reach two globalhashes in one year. Of course they couldn't let that hash just pass and immediately started to make plans. A shoutout to GeorgDerReisende, LeslieHapablap and, of course, NathanWoodruff who all alerted us to this opportunity - thanks a lot guys!

As the hashpoint seemed easily accessible being situated in the a field right at the Czech-slovakian border they didn't had to be big on preparations this time and just agreed to meet for lunch on Saturday to plan out the details. After a hefty lunch at Cafe Drechsler they took the subway to the hashcave and started the trip towards the Czech border. Travel was light on this second Advent afternoon and they had a pleasant trip all around, crossing the border around 3:30pm and reaching the outskirts of Skalica at 4pm. They parked the car on a meadow next to a dirt track, changed into their hashgear and started the walk towards the globalhash. Although they were looking for tracks of Codae who had been at the hash earlier this day they couldn't make out any tracks as the soil was very muddy and they had trouble not getting stuck. On their way to the hashpoint they observed some deer and other forms of wildlife but weren't able to take pictures as it was already at last light and they hurried to get to the hashpoint. Just before they reached the hashpoint a small brook cut off they way, but they found a spot where they managed to make a jump to the other side without having to walk through knee-deep water. Although they didn't quite manage to get to the hashpoint at exactly hash'o'clock B2c managed to take some screenshots for proof at hash'o'hash (16:16), which seemed close enough ;) Another globalhash in the bag!

Sitting at home base in Budapest, I found this globalhash a tempting target. Lacking any personal means of motorized transportation, I had to make my plans around the local mass transit schedules. I was operating under the constraint of being back in Budapest for the start of the Putnam examination at 4 PM, which ruled out any scheme I could find of completing both legs of the journey on Saturday. In need of a good night's sleep, I therefore made plans to get that sleep somewhere closer to the globalhash than Budapest, namely Bratislava. Two hours after hash-o'clock, I was in line for a train ticket to get there.

After catching the "Petrov" train (which would not have been possible, given my time of arrival at the station, if not for the train being delayed fifteen minutes), the most harrowing part of the evening segment was at the Bratislava train station, where I bought the remaining tickets I needed ahead of time. I failed to notice the sign on one of the four open ticket windows advertising competency in English, so my initial attempts to order tickets from Bratislava to Kátov to Budapest in a sort of Slavic pidgin foundered. Several well-meaning bystanders attempted to mediate, but I don't think any of them knew Kátov existed. Being uninterested in tickets to Kraków or Katowice, I retreated to make sure I had the name right.

I obtained the tickets without difficulty by ordering at the English-speaking window instead, then proceeded to the hostel I'd reserved to write the preliminary report (everything up until now).

Getting from the hostel to the vicinity of the globalhash presented no difficulty, apart from when I woke up in the middle of the night, misread my watch's 3:25 as 5:15, and got dressed and ready to go well before I had any reason to be up. This was resolved by lying back down in bed.

I took the train to Kátov, arriving before 8. The town was shrouded in mist, and most of the people weren't out and about yet, providing a calm and pleasant walking environment. I encountered a cat (appropriately, given the name of the place), but it wasn't interested in getting petted, so I remain without a Hashcat to my credit.

The hashpoint was on the other side of the village, beyond the end of any pavement (in the American sense). The route was extremely muddy. I had intended to make a marker out of rocks found incidentally, but all the rock and brick fragments I found were serving important roles in making the path not consist entirely of mud. I settled for a broken wooden stake I came across, which was itself, of course, saturated with mud.

My sightings suggested that the hashpoint was near a cratch I saw ahead, so I made a beeline for it, hoping the two points would coincide and I could claim a Cross that bridge achievement. This turned out not to be the case: the actual point was somewhere south of there, in a patch of brush along the ditch distinguished by a solitary cattail. I shoved my stake into the earth at my best guess for the hashpoint itself, within measurement error, and spent several minutes wiping my hands of the mud I'd picked up carrying it across the field.

After documenting the globalhash, I decided I had enough time left to pop over to the Czech Republic (which would thus be my eighth country experienced at ground level, after the US, Canada, China, Norway, Hungary, Slovakia, and the United Kingdom). The satellite imagery suggested that there was an open-ground passage from the hashfield to a road along the Morava River (the international border), which met the highway right by a diafluvial bridge. I walked in that direction, only to discover that, in the years since that imagery had been produced, a thickety forest had grown up in the passage. I had a hard time picking through that; I think I ended up traveling mainly through the more mature forest next to it.

After quite a bit more time than I had anticipated, I emerged at a rather impressively boring road. I think it may have been a railroad at some point in the past, given its straightness and elevation over the surrounding terrain. I followed it west, eventually reaching the shore of the river. There was a teal car parked there, for reasons I cannot guess. Next to it was a purple balloon, and although the car had local Slovakian license plates the balloon seemed to be advertising a Czech radio station.

It was at about this time that something happened that proved significant to later events, though it passed unnoticed at the time.

I was by now starting to worry I was behind schedule. I hurried past a hydroelectric station (below which the river looked much smaller), and upon reaching the highway bridge I estimated I had to cover the almost two miles to the Holič train station in under twenty minutes--more or less my top speed. I regretfully nixed the Czech side trip to concentrate all my energy on beating the train.

I expected even my hustling to fall short, so I tried hitchhiking. This failed completely.

Nevertheless, when I made it to the station, several minutes late, the train had not yet arrived. I was greatly relieved, but bemused as to why people continued to show up after I did. The train was scheduled to pass through Kátov at 10:09, and surely it couldn't take twenty minutes to get from there to Holič.

My explanation arrived after I got on the train, when a comparison to the train's clock showed my watch was running seventeen minutes fast. I had not, in fact, been behind schedule during that desperate rush along the highway at all. I probably could have made it to the Czech Republic and back, though I'm not sure the conditions that would lead me to attempt the feat would spur me on with enough urgency to make the train. 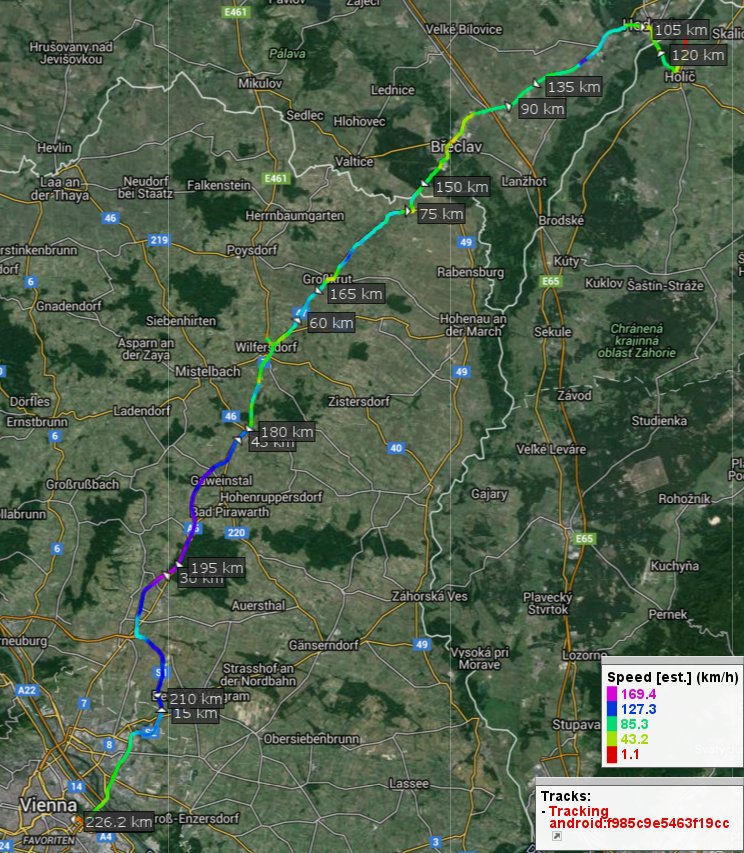 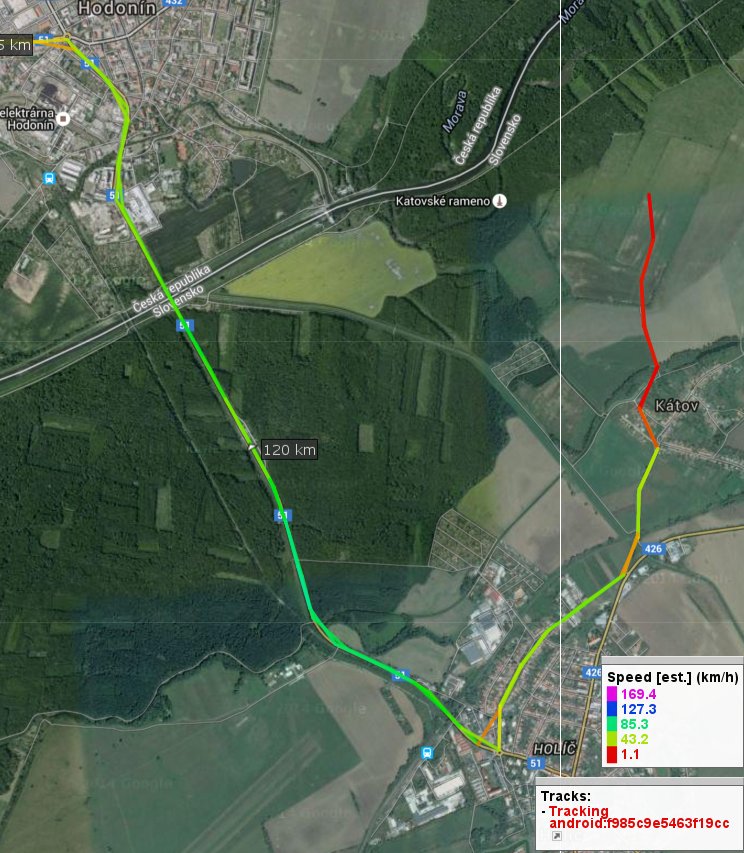