The hash seems to have fallen in the middle of the forest. According to OSM about ~150m to the nearest path. I plan to grab Winterbuche and bike there. Juggernaut is not possible but I am slightly considering a tron route, although it would made it noticeably longer. This would be my first geohash after the Dark Ages. 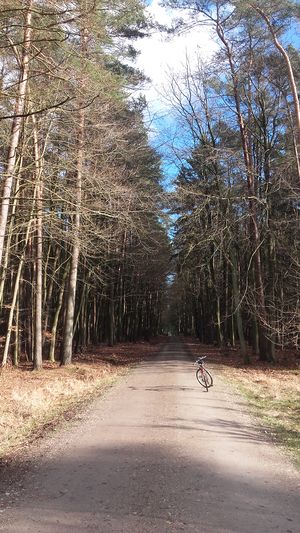 As expected weather for today was good, no rain, little bit cloudy but should be sunny in a few hours, and a comfy 3 to 6ºC during the day. I had been raining during the night, so the paths may be muddy, but no big deal.

It had been a few weeks since a last took my bike, so I was a little rusty. I feel that more towards the end of the expedition.

So, with Winterbuche I went north, direction the hash. I had some podcasts to hear while going there.

After Neuenkirchen I took a left heading Groß- and Klein Kieshof, where I haven't been before. A very quite path. And not as muddy as expected! Then right after the forest where the hash was hidden, I passed by Jager where I encountered a beautiful little church. It had a newer look than the other churches in the near villages. I mentioned it before in other reports, they all look the same but at the same time they are all unique.

Now I entered the forest. All the paths where clear and as I suspected, the nearest path to the hash was 130m of it. So I parked there Winterbuche and did the last approach walking. While doing so, some woodpeckers were busy near me, but again, I wasn't able to spot them. I saw also some eagle-like birds flying over the forest, presumingly also busy looking for their lunch. What I didn't see nor hear were deers and squirels and such. They are stealthier.

Well, as saying, I was almost on the hash. There in the middle of the forest, where there are no paths, I encountered some difficulties then they were some swamp areas which I had to cross (remember? I had been raining the night before), and since I didn't want to get my feet wet I had to get around them. Straight line was not possible, but I managed to reach the exact coordinates of the hash! :) YAY, SUCCESS!

Danced for a while, took pictures as proof, and went back. While going back I had my lunch. After the sandwiches and orange in my system, I had energy to cycle back home. Did I have the energy? ¿^^ As mentioned before, I felt a little rusty so it took me longer than usual, I wasn't as fast. I also took my time to find a few geocaches on the way back. But, yeh, in the end 40km later I managed it home. I deserve some rest for this afternoon.

Other Geohashing Expeditions and Plans on This Day