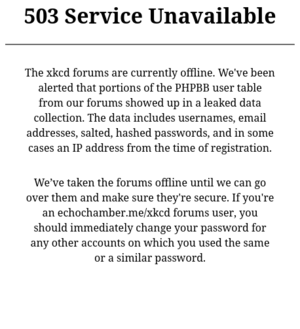 All pages of the Geohashing Wiki looked like this during the Dark Ages.

Shortly after the xkcd PHPbb forums were confirmed as hacked on 1 September 2019, all web services hosted on their server - including the original Geohashing wiki - were taken offline as a precaution. It took until 2 February 2020 for the wiki to be restored at its new home of geohashing.site.

The period between these two dates, when geohashers were unable to access the site, is known as the Dark Ages. It didn't stop enterprising explorers from setting out on expeditions, though.

A Dark Ages achievement for these brave souls* is available.

Retrieved from "https://geohashing.site/index.php?title=Dark_Ages&oldid=756867"
Category:
This page was last edited on 26 July 2020, at 18:44.
Privacy policy
About Geohashing
Disclaimers